Continuing with our tradition of celebrating people and events this past year, Day 5 of our 12 Days of Drinking we celebrate a rather remarkable achievement by local hero (and legend in the making) Jeff Symonds. What he did in Kona was our pick for top triathlon story in 2015.

For those unfamiliar with the sport, “Kona” is the world championship event for iron distance triathlon. It’s our Super Bowl, reserved for the best of the best. Just qualifying for this race is a massive achievement, a bucket list item that few will ever realize. Once there, you hope for the perfect day, with perfect execution of your plan, and above all, no unplanned major surprises. Surprises aren’t good but they are a part of a race as long as this.

So here’s what happened to Jeff in his first Kona appearance back in October. He was having a good race until he encountered crank issues with his bike, which got progressively worse until the left crank became completely unusable with 30 km. to go. Instead of throwing in the towel, he rode the last 30km. with JUST ONE LEG. Anyone who has done any one-legged drills on a bike knows that it’s hard enough riding 2 minutes this way. Imagine doing this for 30km (i.e. an hour-ish) on the world’s biggest stage against the world’s best athletes, knowing they are pulling further and further ahead.

But here’s the truly remarkable part. After completing the bike portion of the race with an undoubtedly throbbing (and completely spent) right quadriceps, he still had a marathon to run. Most people would have called it a day. Heck, they would have called it a day when the left crank fell off the bike, but Jeff regrouped, got ugly and went for it. He didn’t just finish the marathon, he finished with the 3rd fastest marathon, 2:50:15, just 23 seconds short of the fastest run that day. He finished the race 23rd overall; we can only imagine what may have been had his race gone according to plan.

We tend to incorporate one legged drills into our offseason spinning sessions. We do this to help balance the effort expended by the hamstring and quadriceps to help save the quads for the run. I never thought one-legged spinning might actually come in handy during a race.

Now for the drink! The “#getugly” is everything you would expect from a recovery smoothie in Kona but it’s anything but ugly. You got your tropical flavours: pineapple, banana and mango. Protein powder was included to help rebuild that damaged right quadriceps. Vanilla yogurt, ice cubes, etc. are there because … well … it is a smoothie after all. Then there’s the good stuff. Baileys, vanilla vodka and banana liqueur – not just to numb the senses (though it does) but to celebrate one hellava day! #getugly is Jeff’s moniker. And it’s not a coincidence that this drink is yellow. 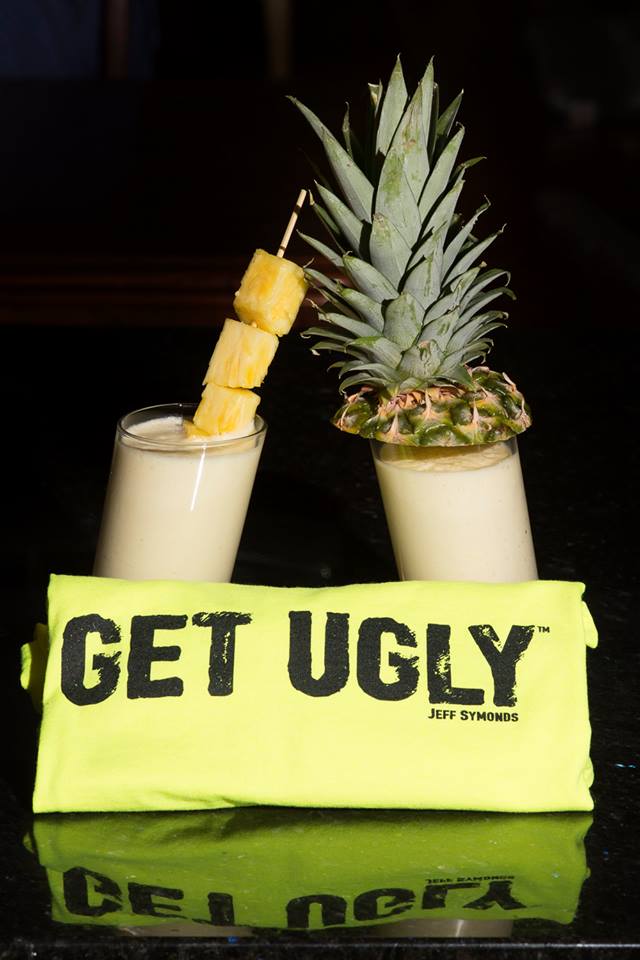 So cheers to you Jeff! Congrats on making our top tri-story of 2015 (Sorry Dan but your one speed bike finish at IMC was sooooo 2014). With all due respect to Triathlon Magazine (which does an excellent job), I was disappointed this story didn’t make their top 12 “Best Kona Stories” list.

The next time you see a million dollar prima donna soccer player rolling around on the turf “in pain” or watch as a $10 million hockey player mails in a half ass effort, remember there are guys like Jeff out there, giving it all they got by really getting ugly and getting it done when it counts most because that’s the only way they know how to compete.