Today we tell a tale of controversy and look for answers to the question “what constitutes a binding agreement?” Canadian Law states “An oral or written agreement between two or more parties which is enforceable by law. In order to be valid, a contract requires an offer, an acceptance of that offer … Acceptance: It is at this moment that a contract exists. The acceptance must be clear, unequivocal, unconditional and made by the person to whom the offer is intended”. A written agreement sounds great in theory but isn’t so practical when an agreement is allegedly struck in the middle of a 180km. bike race where pen and paper are not readily available. However, a verbal agreement can be binding. Here’s the story – we’ll let you be the judge.

Back in August, I rode the bike leg at Challenge Penticton on behalf of our most fabulous relay team “Slower than Expected”. What made the day particularly awesome was that there were 3 other relay teams from our club (5 if you include J-M and Sonya who decided to do the relay by themselves). It was supposed to be a fun event, a great event to wind up the year. No pressure – just a group of friends doing what they love. The truth is, any time you throw a bunch of competitive type A personalities into a bucket, mix them up and pull them out in teams of three it doesn’t take long before lines are drawn and the fun becomes competitive, with each team looking for club bragging rights for the year.

On to the race. Due to an outstanding swim by Pam, I found myself first on the bike. I knew it would be difficult to stay out in front as the competition was fierce with 5 excellent cyclists competing against me in this leg. Sure enough, at about the 30km. mark I was passed by a cyclist from another club team. Let’s call him “Bob Prow”, to protect his good name (as he has only been accused of breaching an agreement at this point and shall be considered innocent until his jury of peers finds him otherwise guilty). “Bob” is simply a great athlete and once he passed me I thought I’d never see him again. Heading to Osoyoos, we fought some pretty nasty headwinds. It was a really tough day. To my surprise, I noticed I was closing in on Bob just outside Osoyoos. I hunkered down and continued to gain on him until I actually caught up with him. Bob looked in control (and surprised to see me) but I felt like I was dying. I really didn’t think I could beat this guy on this day so I did the only thing that would give my team a chance to win – I cut a deal. “Hey Bob, you’re looking a little tired. Are you okay? Nasty headwinds, hey? How’s the nutrition? You look hungry. Want a Honey Stinger Waffle? I’ve got extra that I don’t need as I’m doing great … Tell you what. Let’s make a deal. Why don’t we ride together, have a few laughs, finish together and let our runners settle this thing?” I said all this as convincing as possible, doing my best to look in control like I would take off at any moment and dust him (truth is my quads were burning and I was hurting after making that effort to catch him). I may have even given him stink eye to let him know I meant business. So here’s the controversy. I’m reasonably sure Bob laughed and said yes. I’m even more sure he at least nodded. And I’m 100% positive he blinked in agreement. I argue that a deal was struck.

Shortly thereafter, Bob slowly pulled away. He continued to be in sight (and only a few minutes ahead) until about the 130km. mark. Then I lost sight of him as he dusted me, hitting transition about 10 minutes ahead of me. So much for our agreement. You blinked, Bob … I know you blinked. And you know that I know that you blinked. As George Costanza would say “we had a pact!” 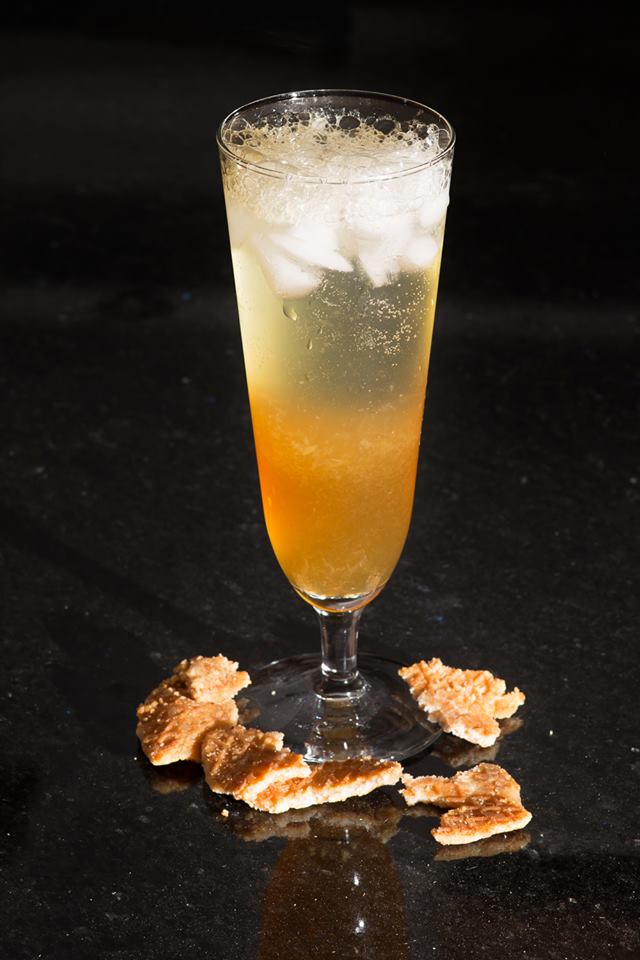 The Broken Contract is a modified … or, rather, broken … version of “The Gentlemen’s Agreement” which is a real drink (do you know how hard it is to find a drink with the word contract or broken in it?). Jack Daniels, agave syrup, lemon and soda water are chilled with several broken ice cubes. It’s served with one very broken caramel Honey Stinger waffle.

Cheers to you Bob! (and to the other cyclists on the teams: Robbie, Dianne, J-M, Sonya). Kidding aside, you were on top of your game that day and the best cyclist won.

But back to the question at hand: What say we? Is Bob innocent or is he guilty? Hero or scoundrel?