Day 9 of the 12DOD remembers some of the epic rides we had this year. Not epic because we had a great ride though. Epic because of the rain!!!

We had one of our first training rides this year in Whistler in mid-May. I was super excited because this was the first time I was finally going to tackle Mt. Callaghan. Ten of us left the Whistler Athlete’s Center in quite a jovial mood. Boy that changed quickly! We went from clear skies, to a few drops, to downright rain the further we got up the mountain. Of course I had long since seen everyone’s backsides as they rocketed off to the top of the mountain. I think they were going so fast they didn’t even know it was raining! I decided to pull over near a shack on the side of the road and catch them on the way down. I quickly realized that standing around under the overhang of this shack was making me even more cold, so I decided to head back down the mountain. I normally love nothing more than screaming down a mountain at top speed, but this was miserable, and rain made the braking scary. The puddles of water in my shoes were the final straw – I’m out! I was happy that I wasn’t the only one who quit as a few others were shaking and freezing (J-M and Trudy in particular). Ten of us started; five of us quit. Sadly, Mt. Callaghan would have to be conquered another day. Joel and a few other die hards stuck it out and made it to Pemberton and back. You guys rock. You’re true Ironmen! I instead enjoyed my hot shower, Starbucks coffee and shopping with Marcia at Lululemon

We had another training weekend in planned mid June, but a bunch of people bailed at the last minute. Joel and I managed to tag along with Erin and some of her athletes for a training ride. The plan was to go from the Athlete’s Village around the back of Alta Lake, out to Pemberton, do the flats and then tackle the grind back uphill to Whistler on tired legs. The weather started off decent and the group met up at the gas station in Pemberton for a refuel (yummy banana bread!) and while they headed out to do the flats, I started the climb back to Whistler. I finally got to experience that SOB climb that everyone has been talking about! I got back to Whistler and a couple of kilometres from the Athlete’s Village it started raining, so I hunkered down there to wait it out before riding the last few kilometres to our condo in Creekside. Just as I was starting to enjoy not having the rain soak me, I got the distress call from Joel. It’s got to be pretty bad if Joel is freezing as he is normally a furnace! I went and got the truck and rescued a very grumpy wet cyclist. On the way out to meet him, I remember passing a few of our group looking very wet and cold, and I know Erin had to rescued some riders as well. Damn mother nature, you win again! But we did get to drown our sorrows in a nice group dinner at Milestones that evening.

Then there was my last training ride before Gran Fondo in late August. Normally at that time of year you can count on heat and sunny weather in the Okanagan. Joel was cycling the bike leg in Challenge the next day, so I had to head out alone. Heading out from Penticton, I made it to McLean Creek Rd where it started raining. I took cover in the gas station at OK Falls where I contemplated my options. The longer I huddled with my bike by the gas pump, the worse it got. It was actually bucketing rain! I tried texting Joel to come pick me up… no response. Apparently he was having a leisurely massage the day before his race while I was wet and freezing… I sent out a plea on Facebook… no response. After I mentally prepared myself for an ugly ride back to Penticton, after 40 minutes, the skies finally cleared up. Even though I had lakes in my shoes again, I knew I had to bite the bullet and head south… as much as I really wanted to head north and find a nice warm bath and glass of wine. In retrospect, I was glad Joel was unavailable as I would have totally bailed on that ride, and I wouldn’t have gotten my longest training ride in (105km).

And who could forget the epic rain after the swim start at Whistler Ironman?!? Watching some the athletes heading out in just tri tops and no jackets was frightening. Extremely tough conditions, but all our friends who started proved how tough they were and finished the race! The rain also killed my 6 week old Samsung phone

And not to be outdone, we hear there was some nasty rain on the Arizona Ironman course recently as well.

The Epic Rain is a version of an April Rain martini. It has Ciroc vodka, lemon vodka, lime juice and chardonnay. Although I think it should be named the April/May/June/July/August Rain martini! 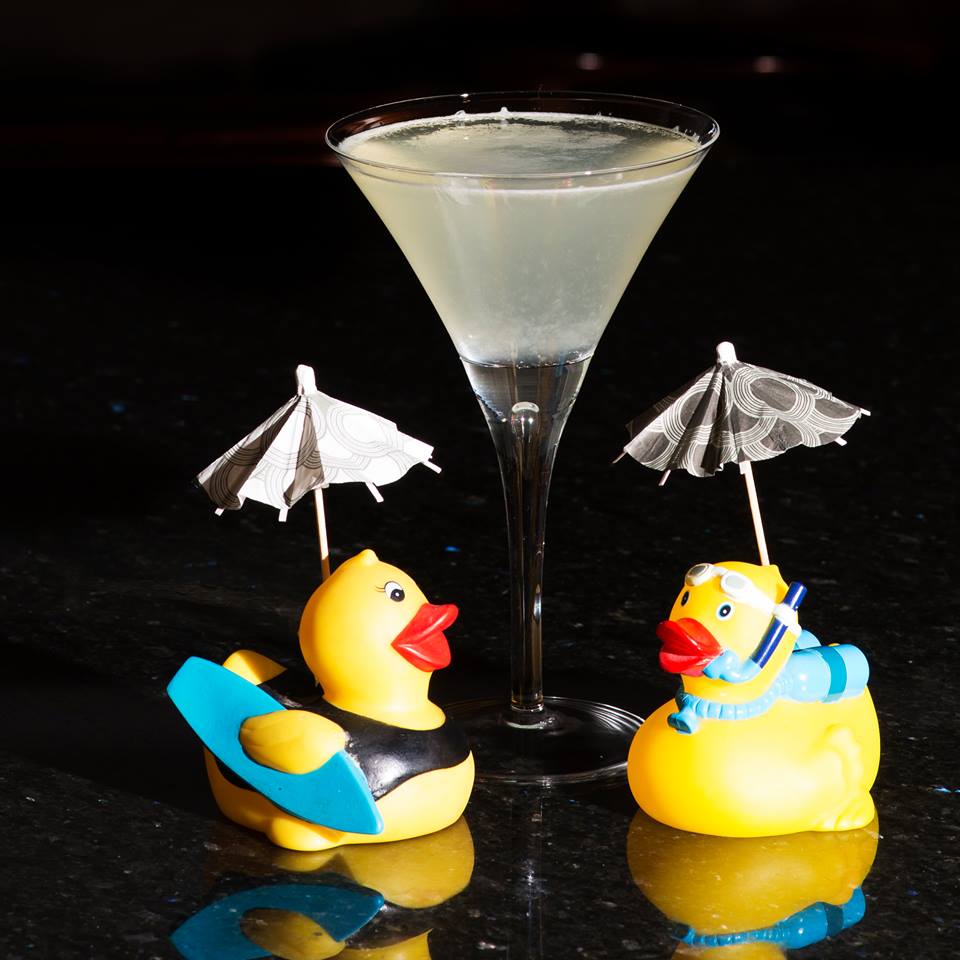