“She believed she could, so she did”.

Tonight we celebrate our good friend Sarah. We met Sarah a little over a year ago when spinning in Tammi’s garage. At the time, she had a marathon under her belt as well as two sprint distance triathlons. She had just signed up for Ironman which is a pretty massive step up from the Delta tri. But she had finished a marathon and was young so … cool.

For the better part of a year, Sarah and I trained together, including some epic long rides. It was during one of those long rides in March or April that I wanted to incorporate a bit of speed work. When I told her it was time to “light it up”, I’m pretty sure it was the first time she heard that phrase as it then stuck as our motivation through to the big day on July 24. 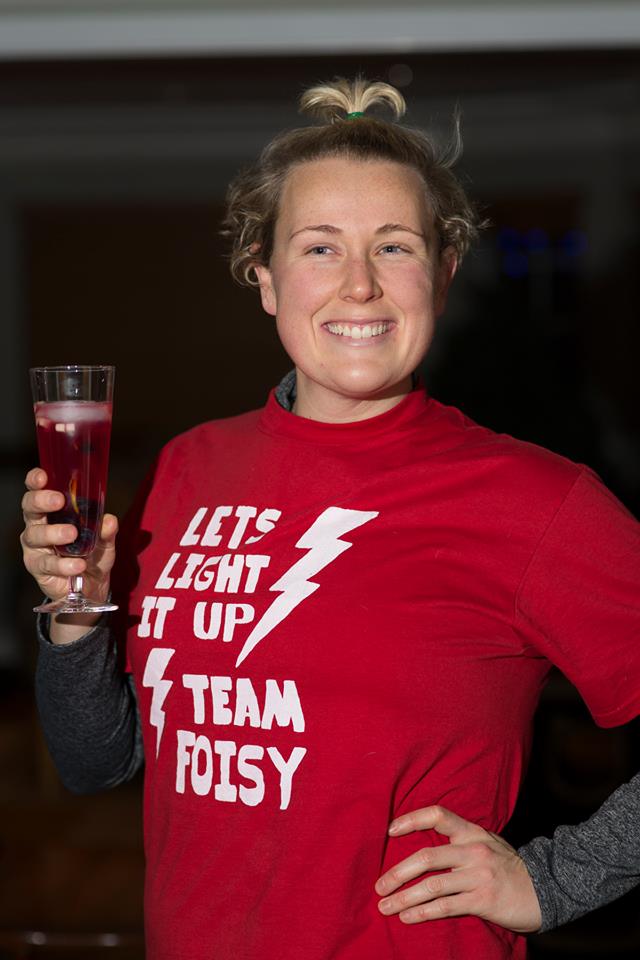 One thing I learned about her early on was her serious competitive side. I don’t think there was a single swim where she didn’t throw it down and treat a portion of it as a race. This included easy warm ups. Any time she was beside me, it was game on. In the beginning I would ask “ummm … we were racing there, right? (really hoping that wasn’t her warmup pace)” Then it became automatic – of course we were racing. By March I had no doubt that she would be just fine and finish Ironman, but what I didn’t expect was for her to keep getting stronger and stronger, pushing me to get better. As much as I wanted her to do well, there is a competitive side of me that did not want her to beat me. I knew she was stronger in the water, but I felt I had an edge on the bike and the run was anyone’s to take. As we got closer to race day, there were three moments that had me thinking she would finish ahead of me. First was her awesome race in Victoria, a half iron, where she finished 6 hours on the nose. She kicked some serious butt that had everyone take notice. Then there were 2 long training rides at Whistler about a month before Ironman where she finished ahead of me coming back from Pemberton. I’d love to throw some lame excuses as to why she finished ahead but they would be just that – lame excuses. She was simply better on both days. All things being equal, I knew I would have my hands full to finish ahead of her. Truth is, I felt like I had trained really well this year, if she beat me I was actually okay with that because it meant she had a great race too. But the main reason I wanted to finish ahead of her was to be there when she crossed that line.

So things didn’t go exactly as we envisioned on race day. She was simply awesome in the water, breaking 1:10. If nothing else, she could boast an absolutely awesome swim. She had a strong bike but the run unfortunately was a struggle due to some GI issues. Whether it was the heat or nutrition issues, it’s hard to say. Her goal was to finish, and finish she did. We were there at the finish line, when she crossed well in advance of the 17 hour cutoff. She was an Ironman! For most people, let alone first time finishers, that would be enough to carry them forward – certainly for the rest of the year and maybe forever. Unhappy with her run, she felt there was still some unfinished business. 5 weeks later, she was our team mate in the Challenge Penticton relay where she lit it up on the 30km run with a three hour finish. But I would say her crowning achievement was then running a marathon in early October where she didn’t just finish the marathon with a personal best but she killed it with a sub 4:15 finish. She believed she could, so she did. 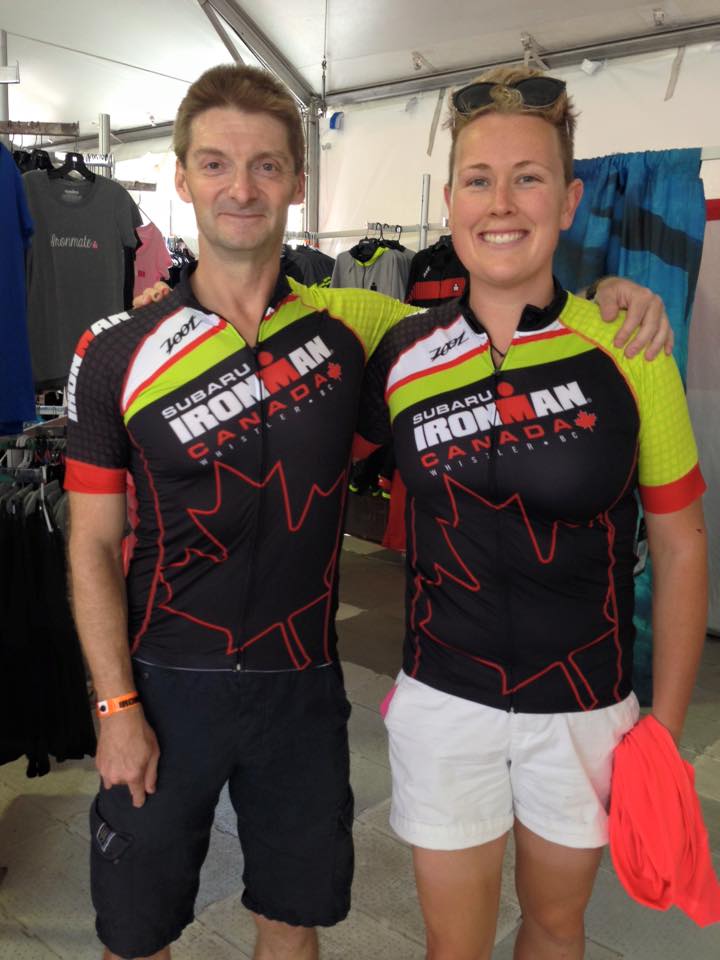 “Light it up” is a pretty wicked cocktail. Here’s how it plays out. The key ingredient is smoke. I’ve never tried using smoke in a cocktail but this was a year of firsts and was happy with how it turned out. Smoke can be bitter, so it pairs well with savory drinks or offset by a bit of sweetness. I decided to go with a bit of sweetness but balance it with herbs as well. 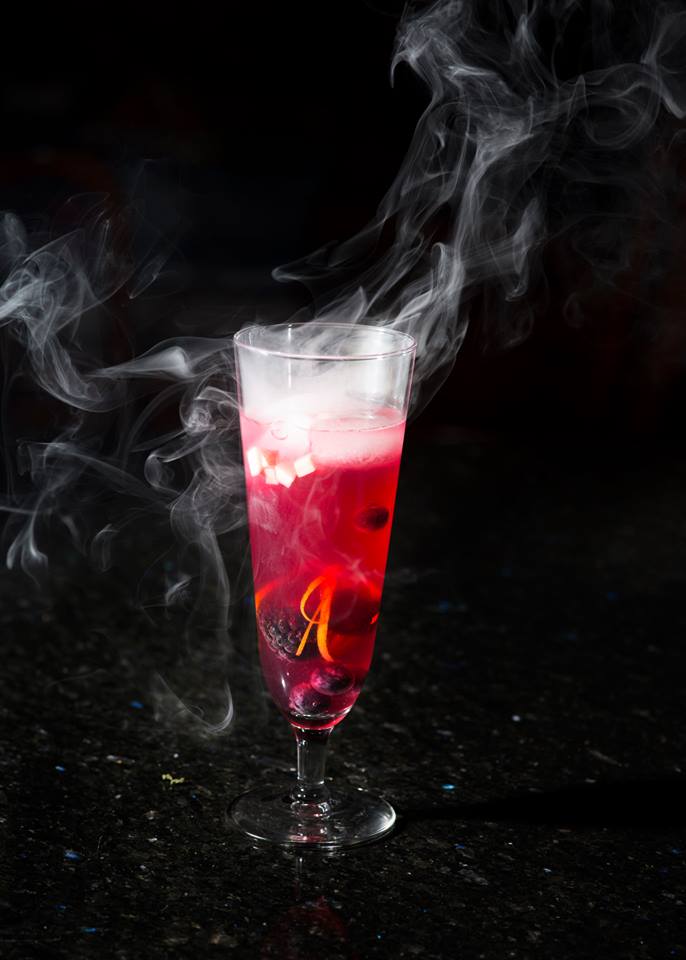 Lemon vodka was infused with fresh ginger, chocolate bitters, calamansi, lots of thyme, orange rind, fresh blueberries and blackberries. This mixture was then placed in a plastic bag along with some heavy applewood smoke. The drink just sat there, absorbing the smokey notes for about 5 minutes. It was then shaken with ice. Finally it was served over ice, fresh orange peel, blueberries, blackberries and apple. A bit of smoke was added at the end for flavour and dramatic effect. The smoke really does come through. I think 5 minutes in a sealed bag is about right to get some flavour but not overwhelm the cocktail with smokiness.

Cheers to you Sarah! Congrats on lighting it up this year, but more importantly, being such a great training partner and friend. We talked a lot about how I pushed you, but I think it’s fair to say you pushed me hard and held me accountable. It was simply awesome training and racing with you this year. Cheers!!