It’s all your fault Robbie!! Well ok not really, but you had a big part to play in this one.

Joel mentioned that this is the year of Goodbyes. Well we weren’t the one who started the trend!! 2017 saw several of our friends make some Rather Radical changes and depart the Lower Mainland, including Rob and Geri, Robbie and Marcia, and Ross and Pam. If you notice the theme yet… Day 5 of the 12DOD is called “the RRR’s”. Apologies to the spouses, but it would have been better for this post if you were named Reri, Rarcia and Ram 😜

Rob was the first to Retire to the greatest place on earth… Penticton! Although his Retirement didn’t last long and he can now be found working at the Bike Barn. At least we knew this was coming because Rob had been talking about this for several years. He was the first to show us how to throw caution to the wind, do what you really want, and have no Regrets. It was truly inspiring. Hopefully we will soon see you out on the Road in Penticton!

The real bomb came at an SAA board meeting in June when Robbie announced that he was moving to Florida! He showed us the beautiful Jensen Beach area on Google Maps, and how cheap houses are there compared to Vancouver. Given the incredible amount of Rainfall Vancouver had this year, it wasn’t hard to understand why a Rational South African would want some sunshine! Robbie was the Reason why we went home that day and started googing new business opportunities. We knew for years that we would end up in Penticton, but it was Robbie’s passion for Realizing a better life that got us thinking about how to make our dream a Reality. But that’s another story and this is about Robbie.

This year was also a year of change for the incredibly Reserved Ross and Pam. Imagine our Reaction when it seemed like one month he sold his business interests in Carter Hales, the next month he sold his house in Vancouver, and the next month they took a whirlwind tour of the province to decide where to move to. Originally Ross had said he was planning to move to Penticton. Clearly he’s directionally challenged as he Rejected Penticton in favor of the Comox Valley. Recently we saw some photos with Ross and Pam Relaxing on a beach and Really enjoying their new life. Clearly they made some great choices. 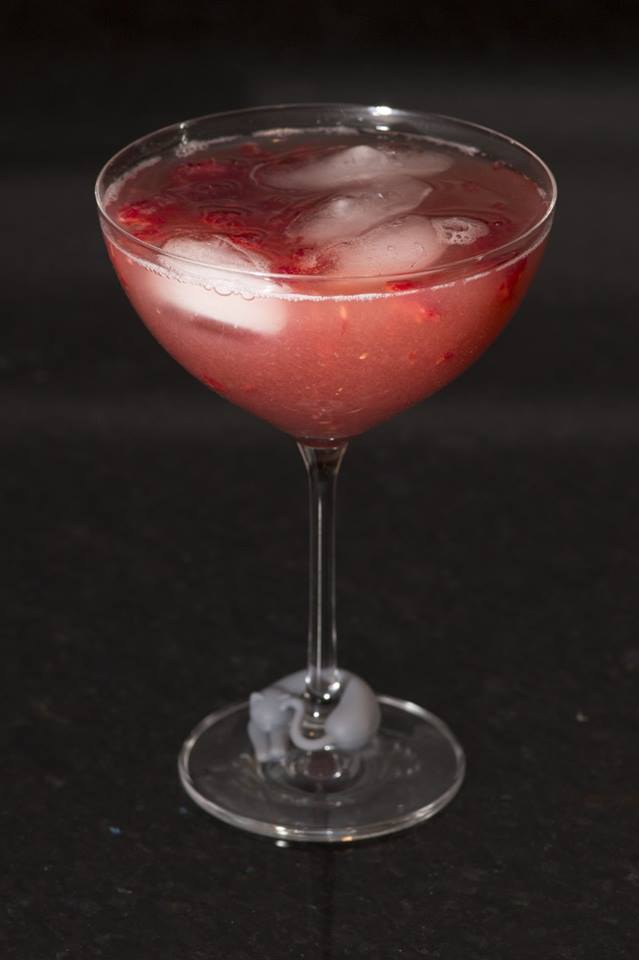 Tonight’s drink is brought to you by the letter R and the fruit Raspberry. The “RRRs”, which is served in a Round glass, is made with muddled fresh Raspberries, Raspberry vodka, Chambord (Raspberry liqueur), Alize Red Passion, Raspberry juice, and a Rhubarb and Rosemary infused simple syrup. The Result is a Really Tasty drink that went down awfully quickly!!! I meant to Rim the glass but forgot to get Red food coloring. Do you like my little Round wine charm?

Cheers to you Robbie, Ross and Rob! Thanks for the inspiration and the kick in the butt. Love, Roel and Rinda.