A funny thing happened on my birthday this year – Stephen King-like in its weirdness. No clowns were hiding in the gutters but something just as peculiar occurred. It started out like any other swim morning in our small town of Ladner. (See, it starts like a Stephen King novel). I got up, left before sunrise, got in an excellent swim and then headed to work. Well, not quite. This day was a little bit different. Hitting a milestone birthday, I took the day off and enjoyed coffee with the gang before going home. I was only gone a couple hours, but in that short time, a strange miracle of nature occurred… 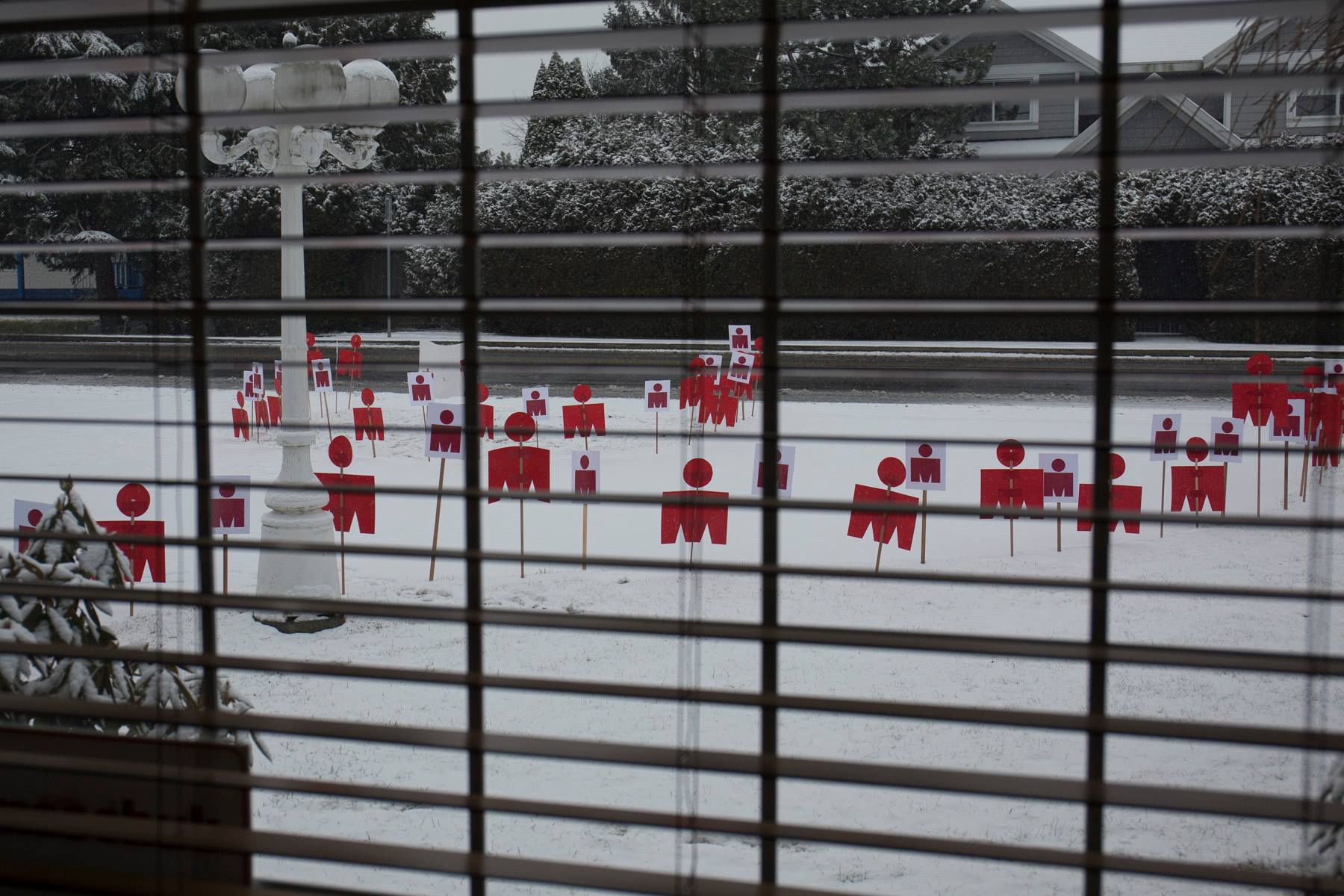 When I left, the grass was green – I swear. Okay, it may have been black but it certainly wasn’t white and there wasn’t anything protruding from it. Even though I couldn’t really see the lawn, I knew it hadn’t yet snowed. There was no snow on the road – I’m no dummy. And it wasn’t so dark that I wouldn’t notice the miracle on the front lawn. It would be impossible to miss. When I got home, not only was the lawn covered in snow, but some strange large red M shaped mushrooms had also grown across the whole front yard. 50 of them!!! Did the snow trigger them? I didn’t think so. It’s snowed in February in the past and we’ve never had these things sprout from the lawn. Never. Was it some some strange fallout from global warming? Chemicals from the nearby farms? I had no idea. It all happened in 2 hours. What I did know is that they looked kinda tasty. In the time it took me to Google “recipes for strange red M shaped mushrooms” (zero hits by the way) they vanished! Now, you’re probably thinking I’m crazy and since I hit the half century mark that day, you’d have a have a pretty solid case. But I have evidence! I was smart enough to take pictures through my window. Yes, I still have some faculties in my old age.

In doing a bit more research, it seems this phenomenon isn’t limited to me. Others who hit a milestone birthday, reported strange birds, pink flamingos being the most common, mysteriously appearing out of nowhere. However, I think I’m the first to report M-dots.

A huge thanks to the wizards Linda and Sarah. I don’t know what they did to the soil to condition it to grow 50 M-dots so quickly but turning the corner to our street and seeing those beautiful ‘shrooms in full bloom is something I’ll never forget!! I think I may have peed a little – okay, that is the old age setting in. 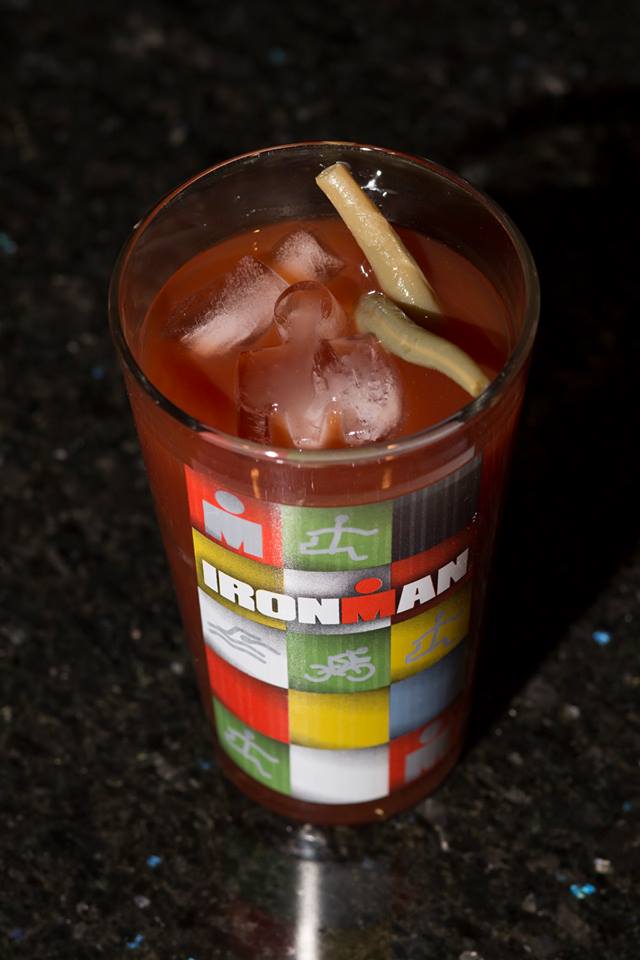 I’ve been waiting several months to make “50 Shrooms”. In a nutshell, it’s a mushroom infused Caesar. 50 dried mushrooms are soaked in Citron vodka for several hours. Make sure you count correctly – it must be 50. I chose citron vodka because I like a bit of citrus in my Caesars. One ounce of infused vodka is joined by an ounce of The Flame (this is now the go-to for all Caesars), Clamato, a dash of Worcestershire sauce and a small dash of cardamom bitters add depth. I added two pickled beans just because. Oh, m-dot ice cubes are also a must. If you’re thinking “ewwww”, think again. It was awesome. The mushroom flavour adds a really nice earthiness to the Caesar. And those wonderful vodka shrooms will make a perfect risotto. 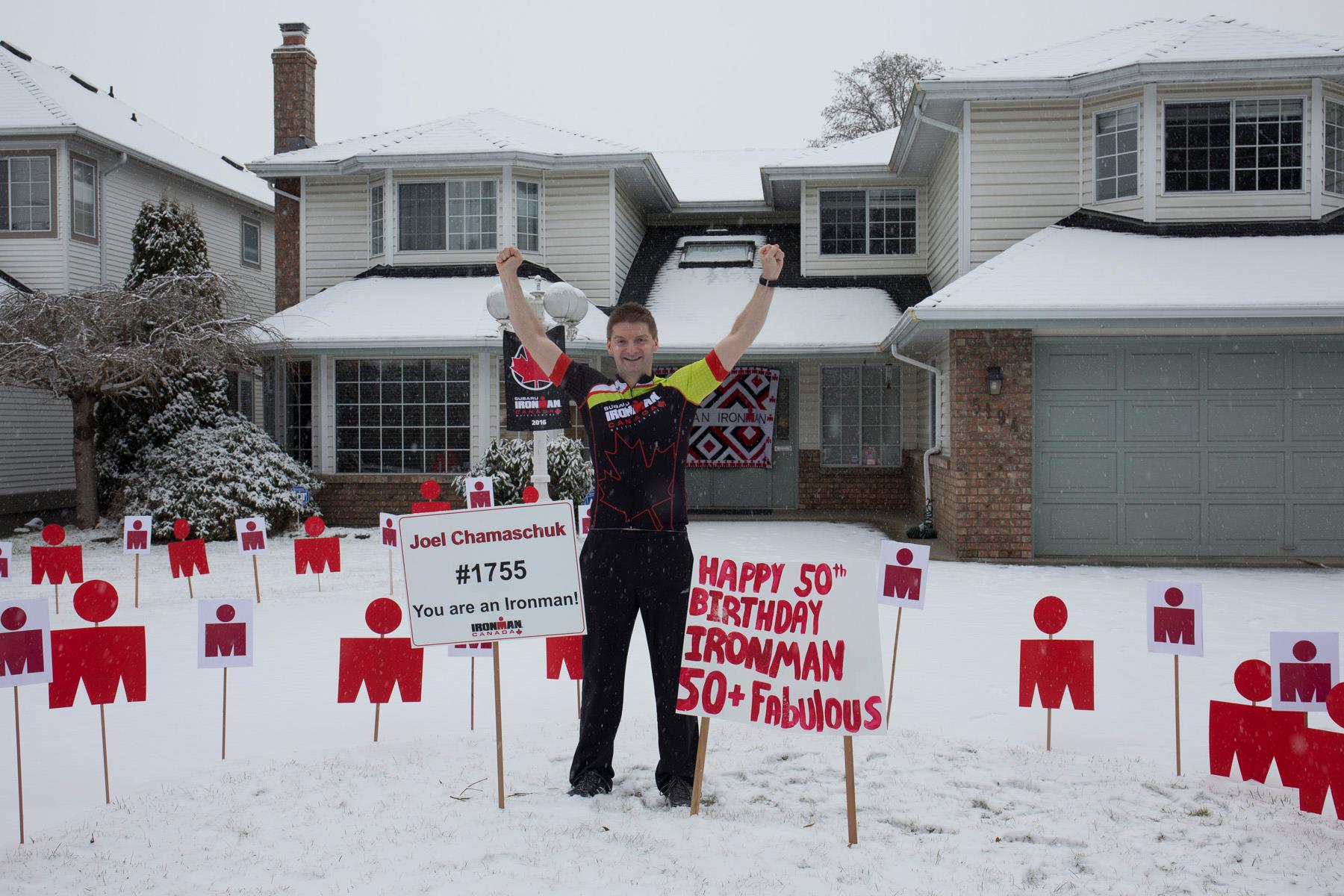 In the background of the last picture, you may notice an m-dot blanket. Sarah spent hours making that wonderful gift and somehow kept it a secret for the better part of 8 months – thanks again, Sarah! Cheers to Sarah and Linda for help ushering in the second half of this awesome journey!