Our second priority this year (after Joel’s viticulture program ended) was renovating the downstairs and putting in a secondary suite to rent out as a short term vacation rental in the summer.  When we bought the property, we knew that we were perfectly located right in the heart of the Naramata Bench wineries and also one block from the KVR trail – so not only a perfect place for us and our new lives, but a great spot for vacationers who like wine and cycling like we do.

I remember the initial project plan I drafted – somehow we thought we would be done in about 6 weeks, and with a 2 week contingency, 8 weeks tops!  I really should have known better after Joel estimated our kitchen renovation in our last house at two months, and it took 8 years…

We didn’t want to spend a lot of money, so that meant doing a lot of the work ourselves.   We didn’t let not knowing how to do something stop us, because after all, everyone can become an expert by watching a few Youtube videos!  With the aid of a few videos, Joel did all the construction, electrical, plumbing and putting up drywall.  I was lucky I had a lull in work, so I did the drywall mudding, painting, tiling and design.  We became regular patrons at Rona where they pretty much greeted us by name – kind of like Norm on Cheers.  I think I have several hundred Rona receipts to tabulate littered across my desk!

Luckily the suite didn’t need a lot of major work, as there was already a space for a living/sitting room, kitchen and bathroom.  The one annoying thing however was this ducting that literally was inches from your head, so we decided to remove it.  When Joel started taking it all out, he discovered a handful of beans tied together with a string in the fresh air intake.  As best we can figure, the beans are supposed to purify the home and ward away evil spirits that may bring misfortune and bad health.  And at this point in the renovation with the reno already behind schedule, we needed all the good luck we could get!

I did some googling to try to solve the mystery of the beans, and found some interesting stuff about ancient Japanese times. It was believed that the change in seasons could bring in bad luck. In order to expel evil spirits and bring in luck, people would throw roasted soybeans at a person disguised as an ogre while chanting “Fuku wa uchi, oni wa soto” (“In with Fortune! Out with Evil!”).  Setsubun is observed each year at the start of Spring on February 3 (coincidentally the day before Joel’s birthday).  Setsubun is considered a new start, and a chance to get rid of evil spirits that bring sickness and prevent good fortune. And what are all evil spirits most afraid of?  Well beans, of course!  But not just any beans. Roasted soybeans known as fuku mame (fortune beans) are thrown out the door in the direction of unsuspecting evil spirits — and sometimes a senior male member of the family is designated to don a demon mask and play antagonist for the occasion.  Tradition has it that if you eat the number of soy beans of your age or your age +1 after the bean throwing, the evil spirits of the year will be expelled and you will not get sick.  I’m not so sure about that, I think if we ate 50+ beans we might be suffering other effects.  Interesting story, but the previous owners were Portugese and not Japanese.

In mid July, we launched our AirBnb listing.  We took photos by moving all the mess to the other side of the wall to take a photo, and then back again to take another photo.  And maybe Joel did a little creative Photoshopping.  We were thrilled to get 3 bookings in our first day or two!  However, the final 24 hours before our first guest arrived for the August long weekend was sheer panic!  I remember tiling the morning our first guests were due to arrive, and we probably did 3 loads to the dump.  While not everything got done, we sat back at checkin time, thinking OK, we made it.  And then Joel realized we hadn’t put up a mirror in the bathroom, so we were scrambling to do that when our guests arrived… whoops.

Today’s drink is taking inspiration from the weird beans that we found.  We pureed a few green beans and an English cucumber in the Vitamix, and then added 2oz of Long Table Distillery’s cucumber vodka, juice of 1/2 a lime, a touch of simple syrup, and some lavender bitters.  It’s actually pretty tasty! 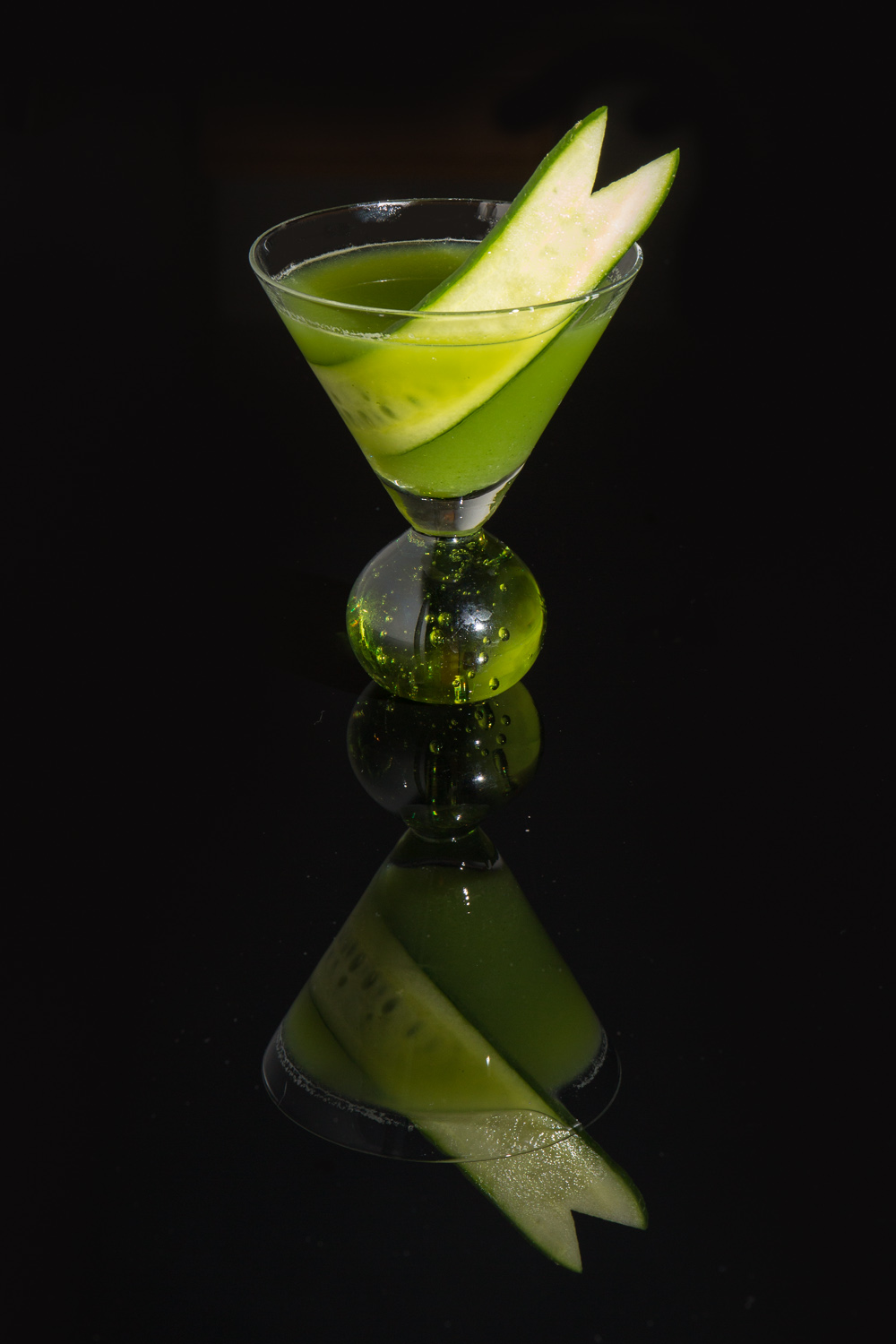 I can’t finish this post without a shameless plug for our vacation rental (click to see photos of our finished suite):