Because 2 chainsaws is better than one.  I never thought I’d own a chainsaw, let alone 2.  After all, I had gone 50+ years without the need.  But things change when you buy a farm.

Coming into 2018, we had an ambitious plan.  At the time it didn’t seem so ambitious, but looking back I now know we bit off a lot.  After finishing viticulture school in March, the plan was to spend a few weeks renovating our rental suite, then spending the summer and fall getting the land ready for planting grapes in 2019.  Seemed pretty straight forward with plenty of time to get it all done.  Of course, a renovation is never completed on time and removing an old orchard is, well, a bit of work.  Actually, it’s a bit of ugly work.  No, it’s a lot of ugly work.  It would have been one thing to remove the trees in the winter when they were nothing more than a bunch of scraggly old branches supported by firewood.  But we witnessed them coming to life in the spring.  And it was spectacular.  Postcard spectacular.  I believe the apricots blossomed first, followed by the peaches then the cherries.  There was a period of few days where they all had flowers. 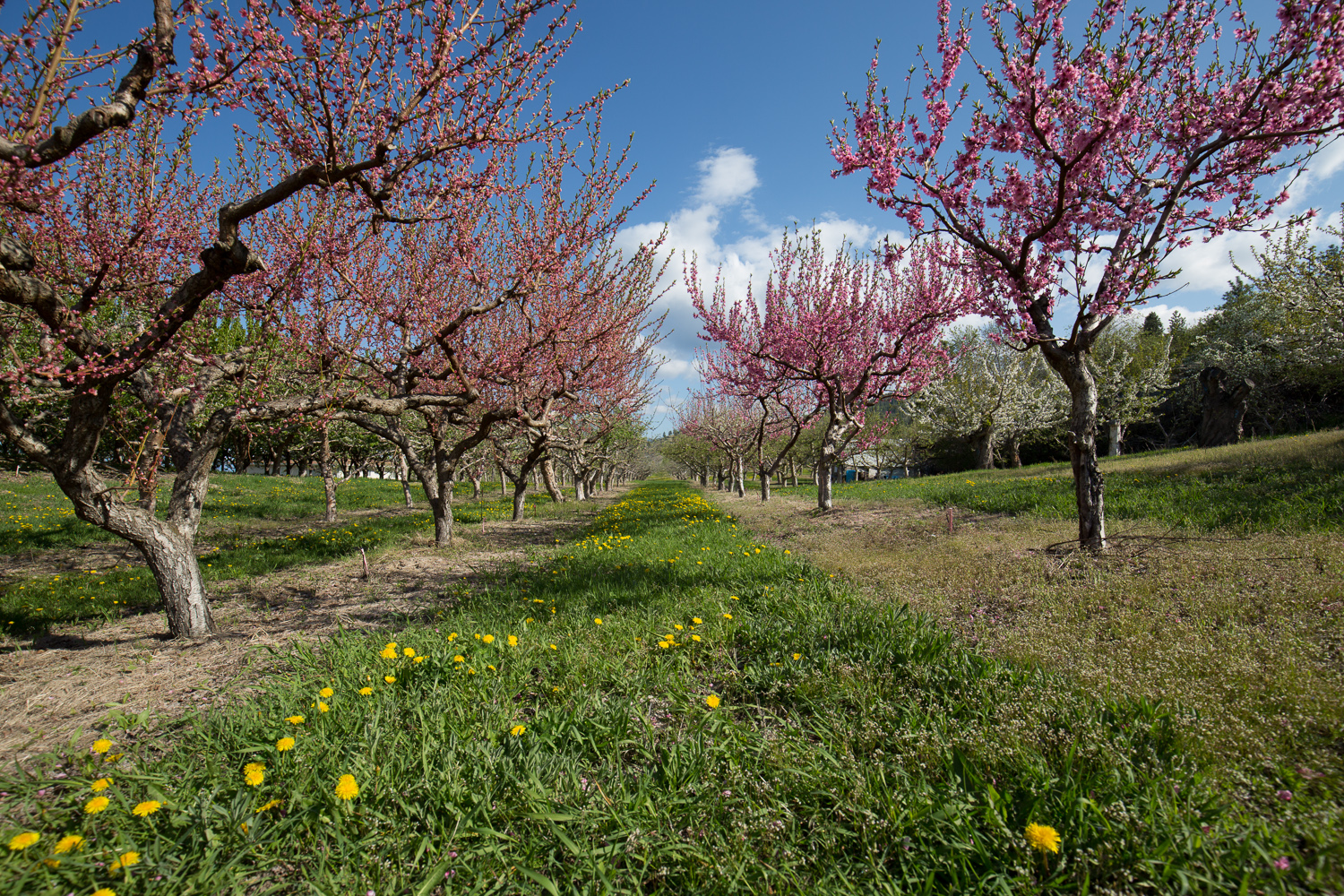 Because it’s realllly hard to find good help in the Okanagan, I ended up doing much of the orchard removal myself.  I went to Canadian Tire and bought what I thought was an awesome mid-level model.  In my mind, it could easily knock down 600 trees.  I’d be done in a few days.  Well, that was inexperience talking.  First of all, you don’t remove 3 acres of orchard in a few days and I quickly learned you don’t do it with a Canadian Tire special.  After cutting down several trees, I knew I needed a new chain.  This is normal.  I ended up going to a place that specializes in chainsaws.  Here’s how the conversation went.

Super-duper chainsaw guy: “Can I help you?”
Me: “Yeah, I think I need a new chain.  Or something”

Super-duper chainsaw guy: “Let me have a look.  Yup, that’s pretty dull.  Were you cutting firewood?”
Me: “No.  I’m removing an orchard”

Super-duper chainsaw guy: with the look on his face that says he’s speaking to an uber-idiot “Oh… with this cute little thing?  Or is this the backup chainsaw?”
Me: “No. I’m doing it with this”

Super-duper chainsaw guy: “I see. Well … good luck … but you may want to look into something a little bigger.”

Of course, I didn’t listen and 2 days later I returned looking into a proper chainsaw because I had burned the play-thing out.  Six weeks later I had managed to cut down about 400 apple trees.  We ended up keeping the majority of the wood.  The plan is to turn most of the bigger logs into lumber that we will use somewhere in the tasting room (to be determined).  The smaller stuff I want to convert to charcoal.

Here is a picture of the bigger apple logs and one of the work in progress.  I have about 50-60 of these logs as well as 10 cherry logs. 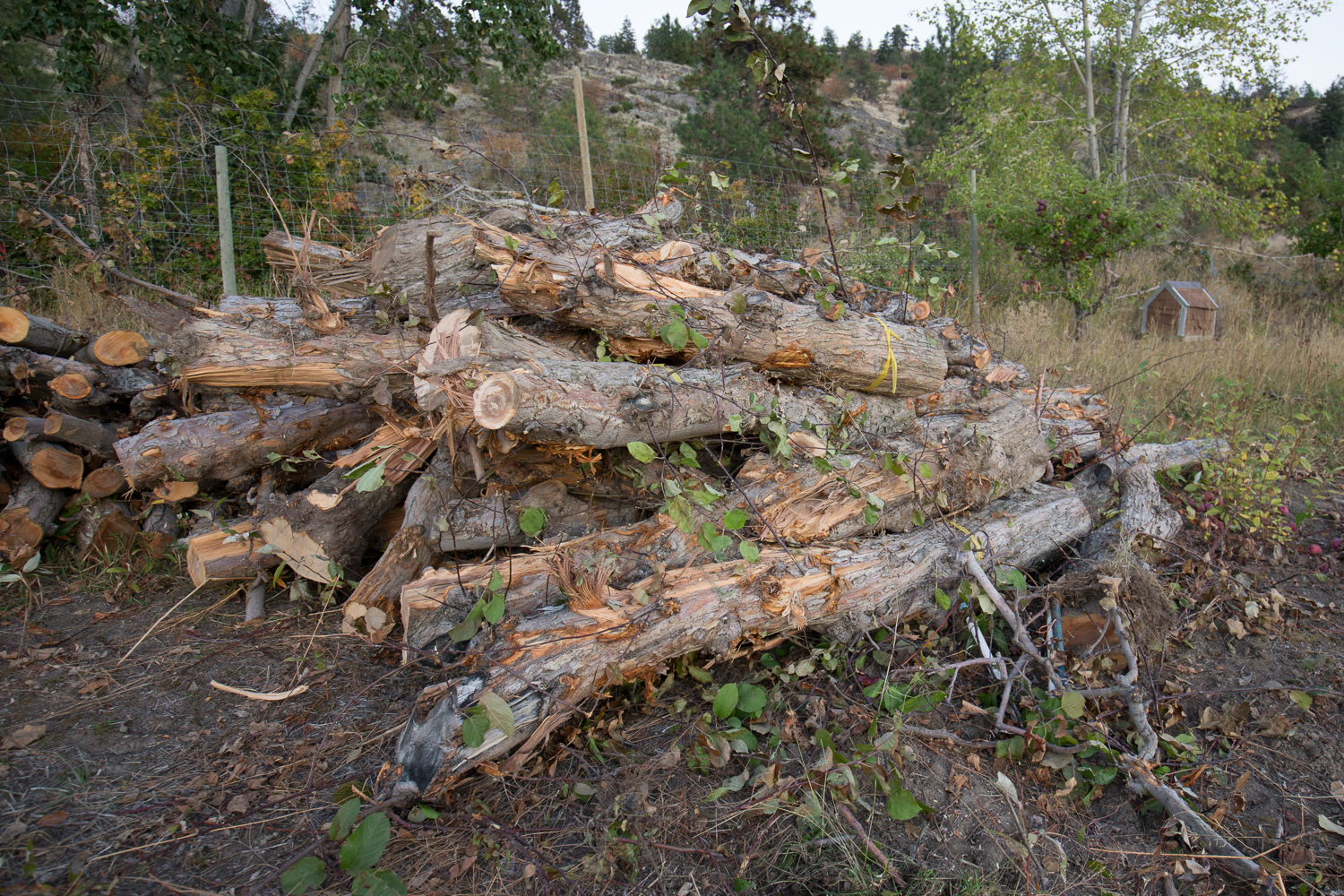 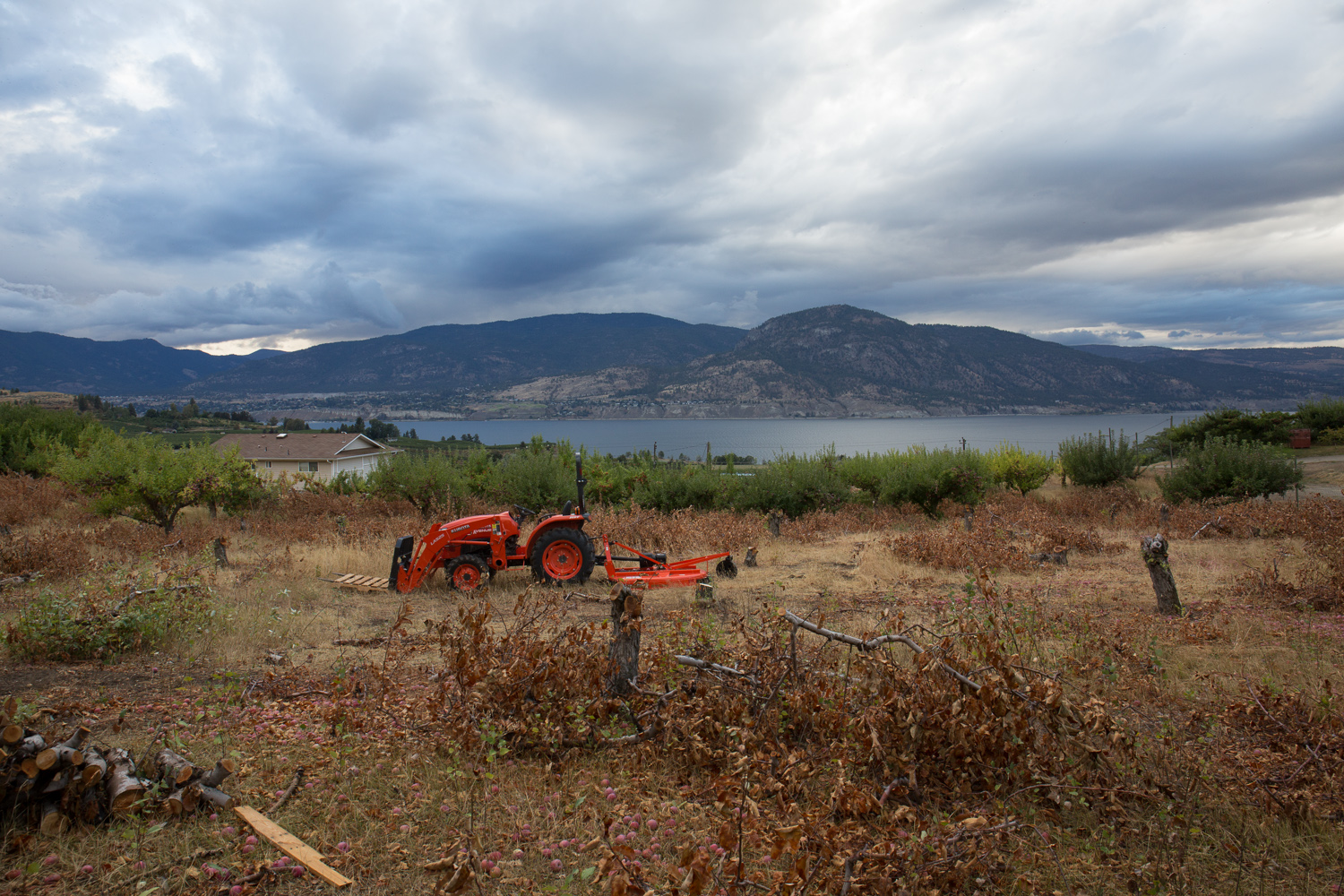 In September I was fortunate to line up a company to remove the 400+ stumps in the ground as well as removing the remaining trees.  If only we had these guys back in April!  The work was quick and efficient.  They accomplished more in 3 days than I did in about 7 weeks.  Our plan also included removing a very old, dilapidated shed that pretty much nothing more than the world’s largest rats’ nest and storage area for the previous owner’s junk.  The same company was able to remove it while making quick work of the stumps. We had been stressing over how to remove the monstrosity, so this was huge relief. 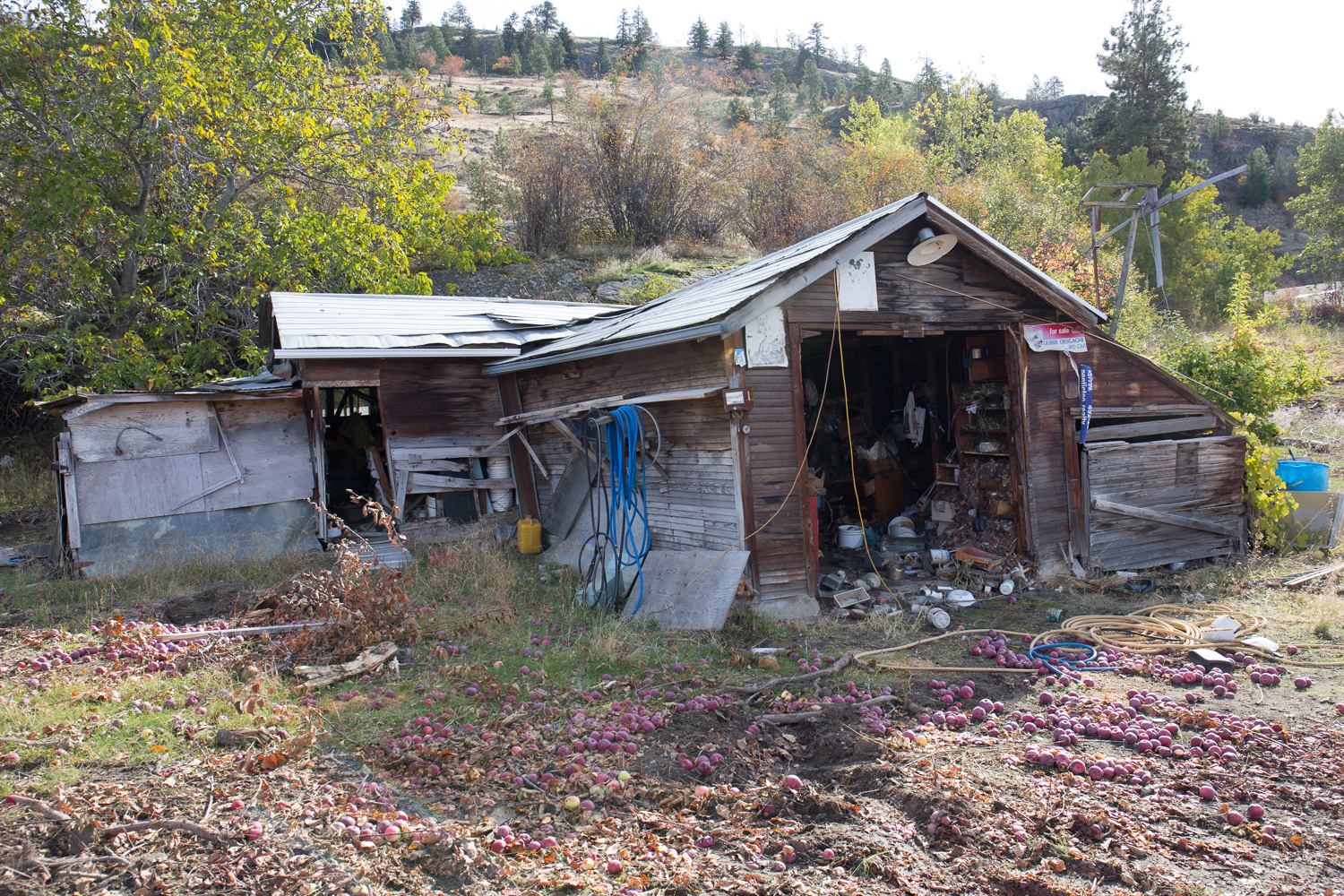 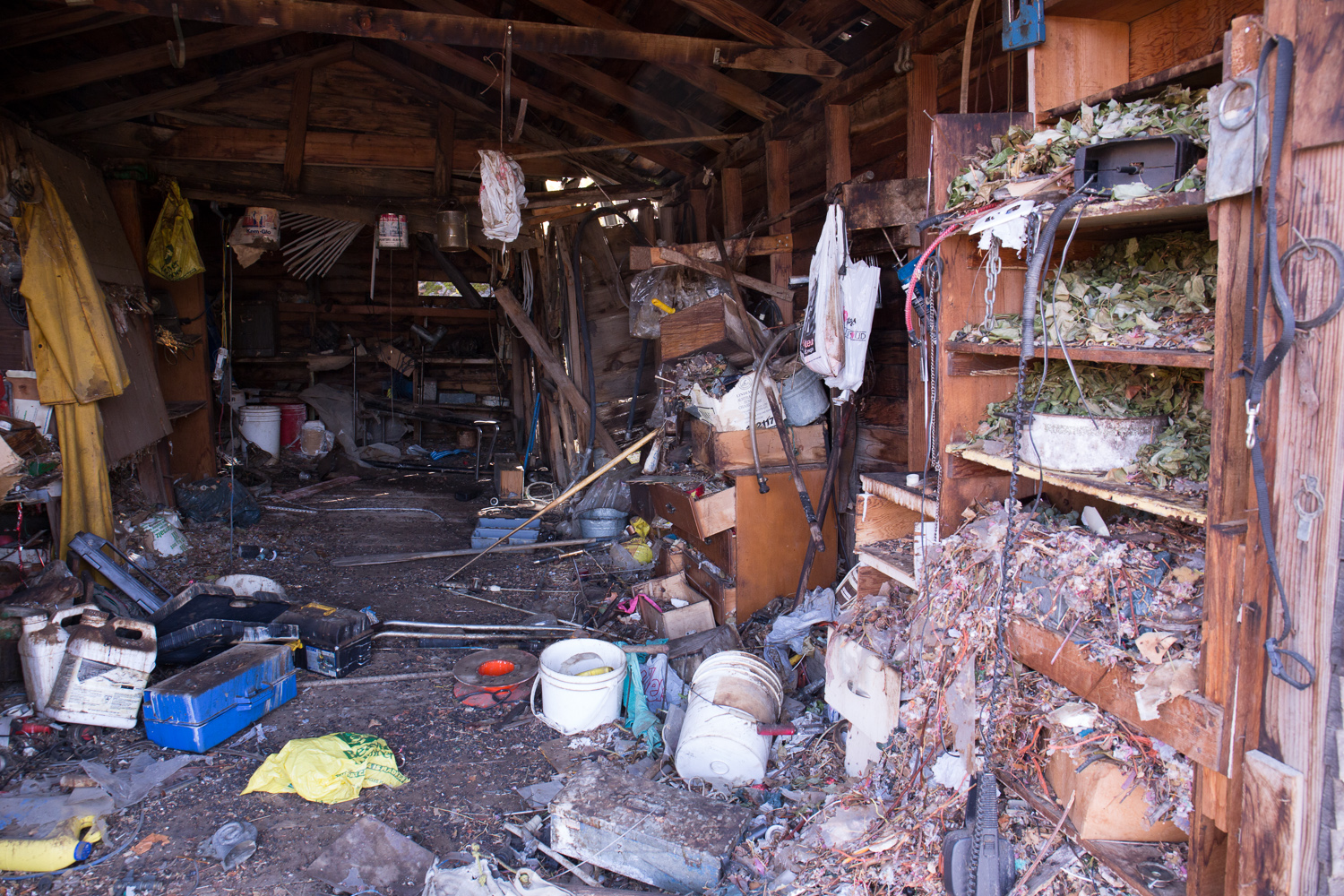 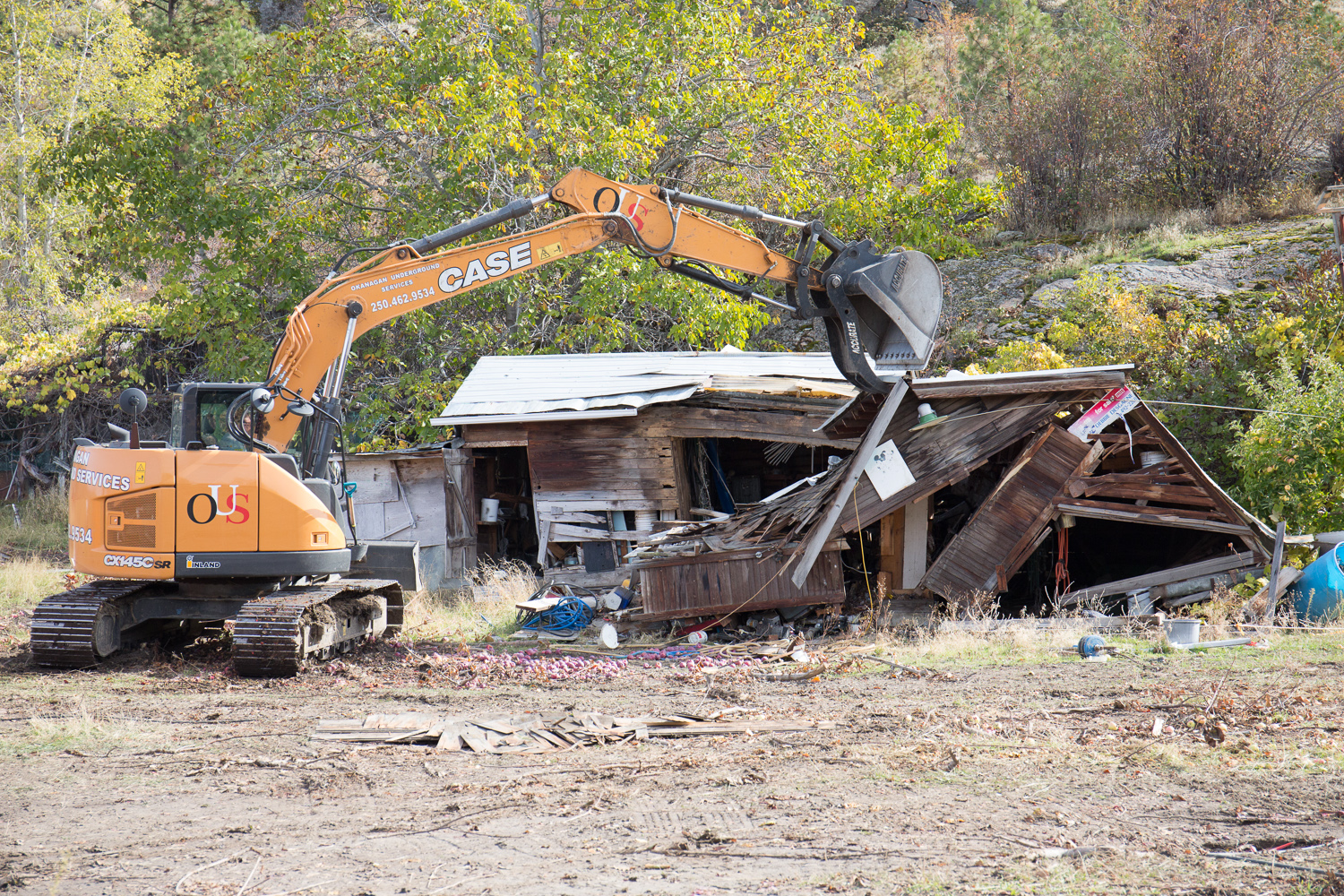 … and suddenly all we had left was a non functioning crapper. 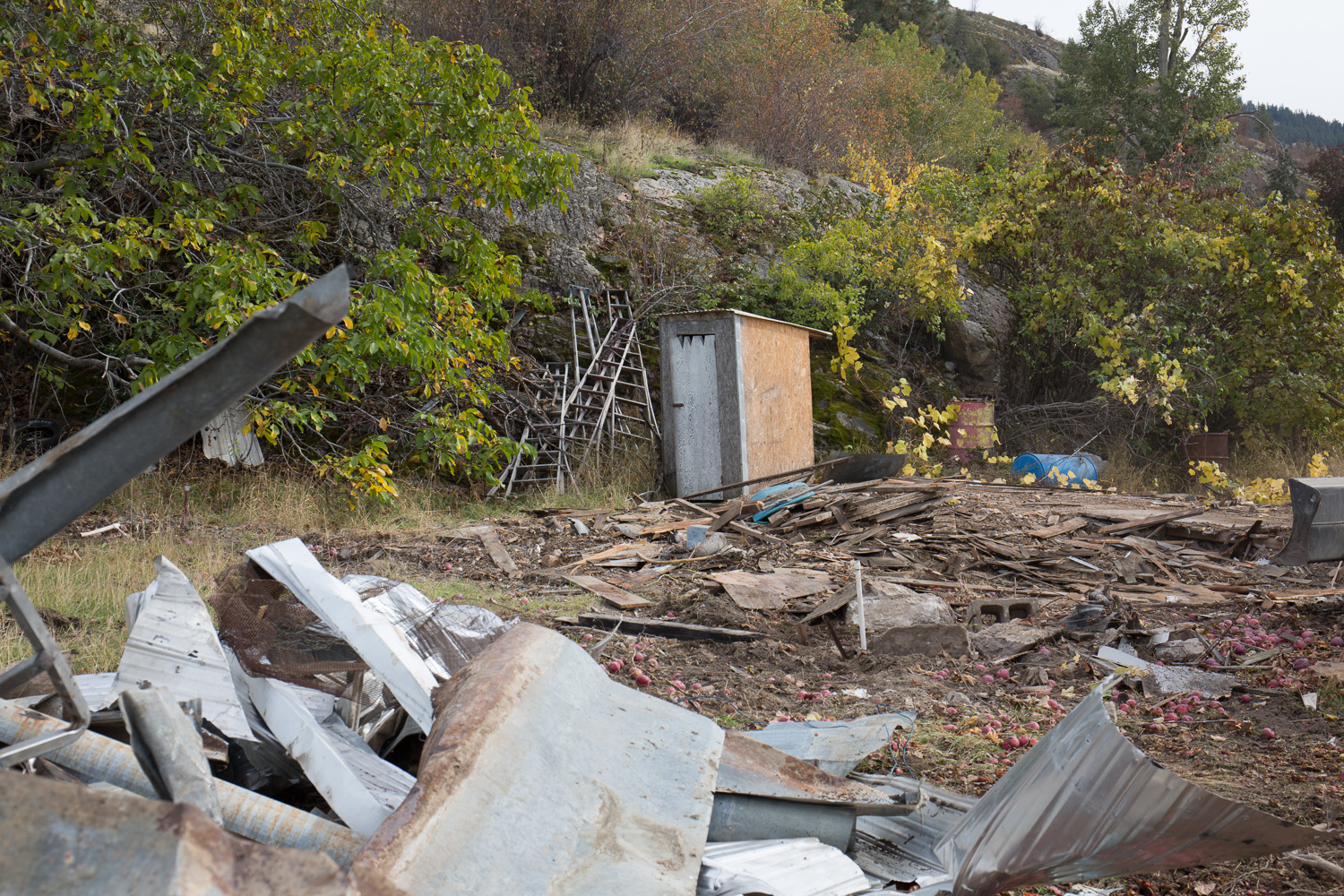 We had already purchased a prefabricated steel building to replace it.  The original plan was to use this new building as a storage shed; however, it is starting to look like it will be our temporary winery building (a story for a different day) and will require more work like running power to it and possibly installing a septic system.  I’m hoping to work on this in the winter and early spring 2019.

With the trees and stumps removed, it was starting to look like start of a real vineyard.  Well, except for the lack of vines and a trellis.  We were also able to have the soil ripped – which involved a large bulldozer dragging 2 large metal stakes across the entire vineyard.  This helps break up any heavy, condensed hardpan soil which will allow the young roots a chance to go deep more quickly. 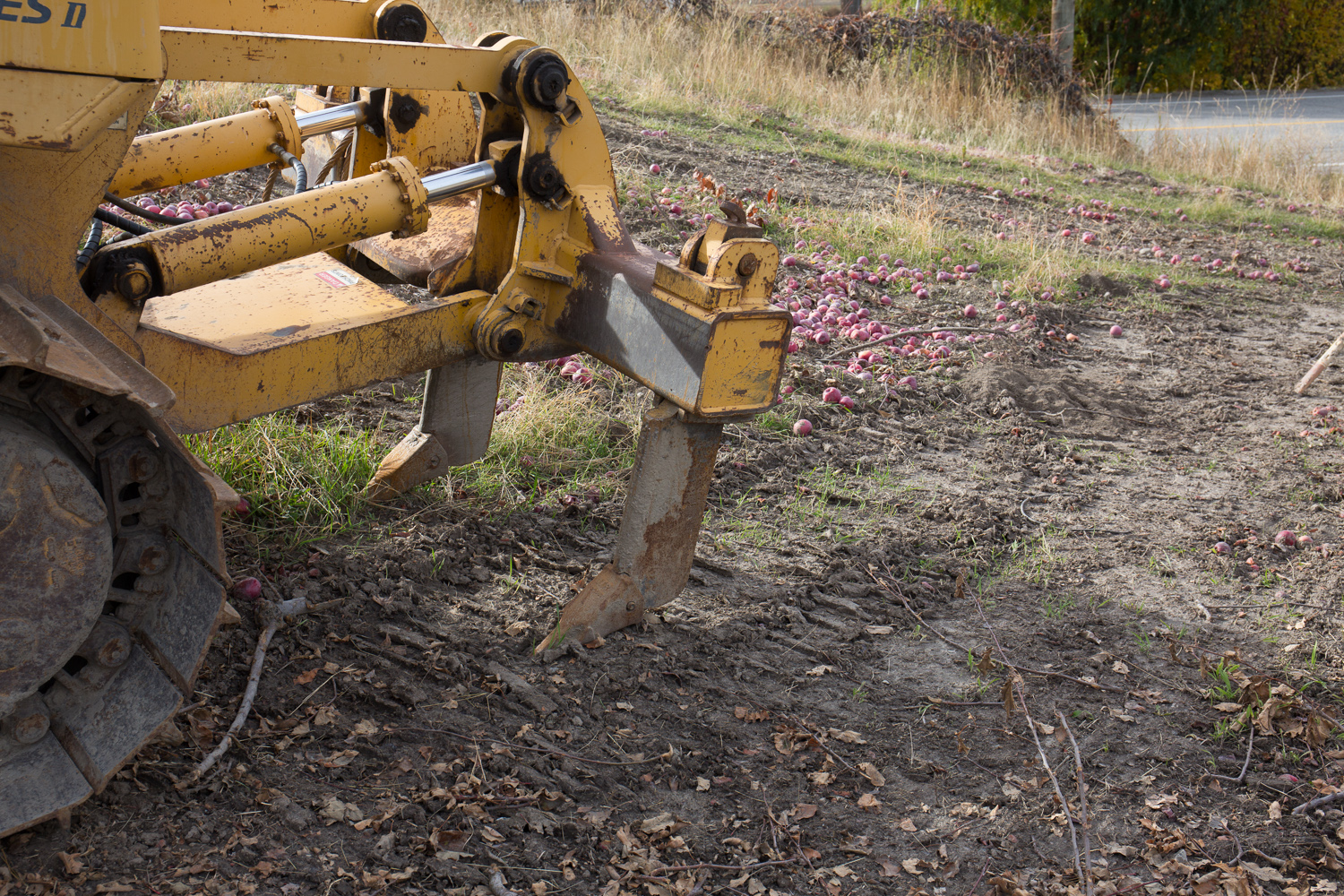 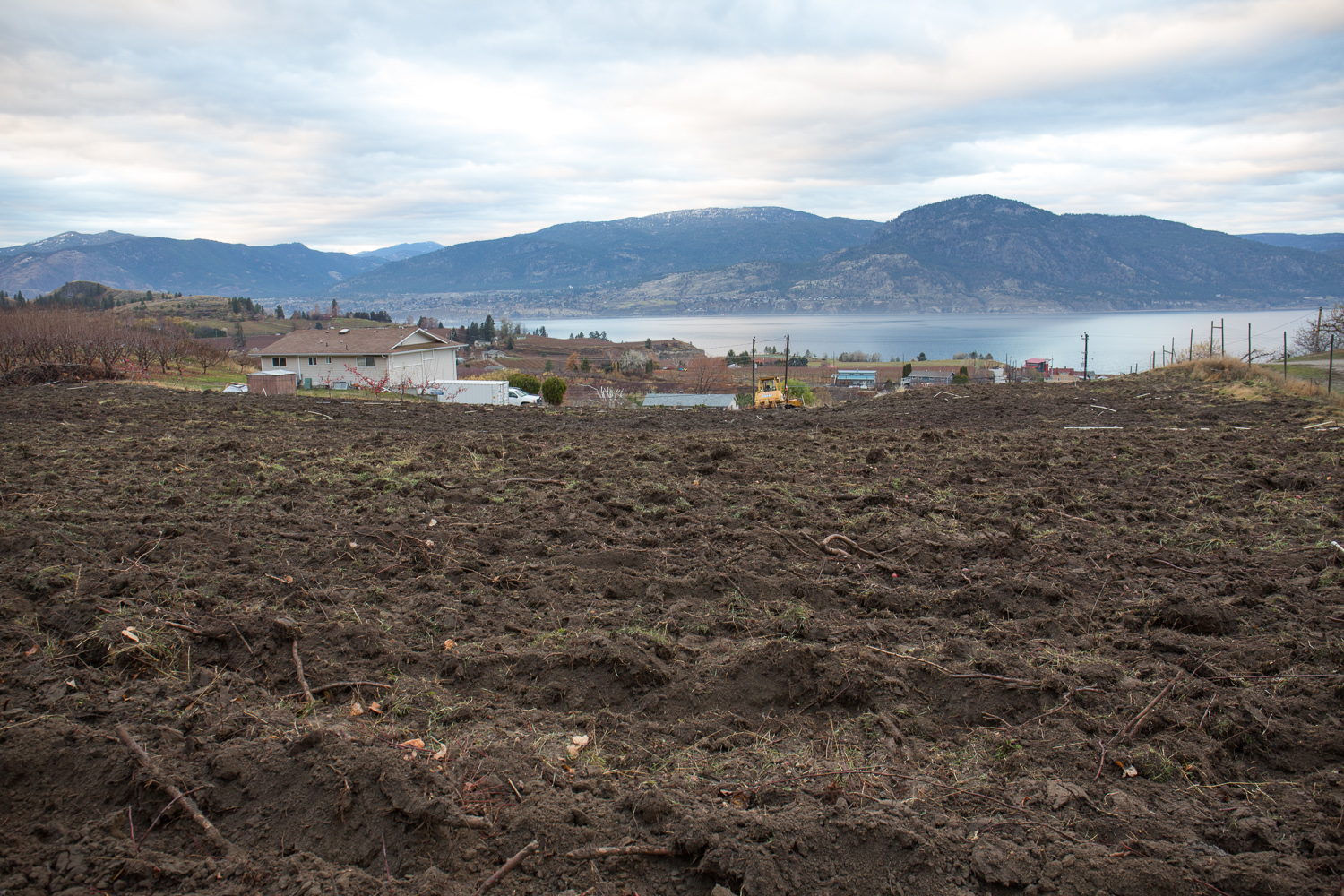 This took took us to November, and unfortunately, we really haven’t progressed much since then.  I’ve spent a LOT of time budgeting and planning for next year and started the application process for our wine manufacturer’s license.  At least this is ahead of schedule!

So, tonight we’re celebrating all the outdoor work that was accomplished in the past 12 months.  I had really hoped to have our vineyard trellis in place as well as the irrigation.  I guess I’ll have something to do in the new year when the ground thaws.  Though I wished we were further along, I’m not unhappy with the progress.  I’ll give it a solid C to a C+.  Normally, I would be disappointed in a C or C+.  But we worked our butts off this year – literally 3,500+ hours of blood, sweat and tears.  For that reason, it feels better than most B’s or A’s.

The. Hardest. Earned. Average. Grade. Ever.

The Broken Chainsaw is a martini that carefully balances ‘what was’ (Apples) with ‘what will be’ (Grapes).  Apples from our farm were juiced and added to an apple liqueur from Alchemist Distillery in Summerland (a brand new distillery).  The grapes are courtesy of Ciroc vodka (distilled from grapes).  We also infused ginger into some regular vodka, and added a bit of lime juice.   Original recipe inspiration here. 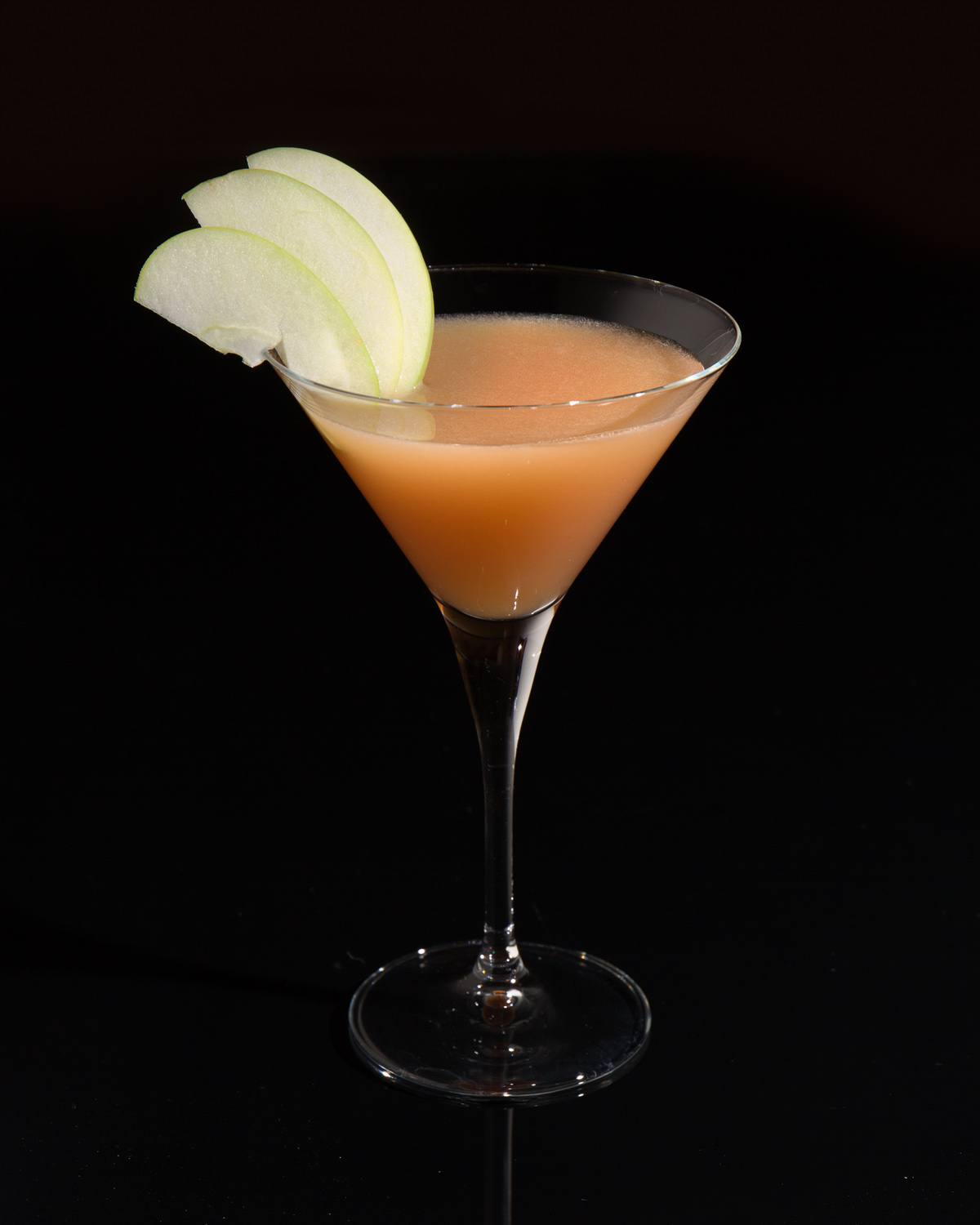 Well, cheers to ambitious goals!  When you shoot for the stars, it’s still not bad hitting the moon.