One of the cool things about cycling, or any endurance sport for that matter, is that you pretty much get what you put into it.  Put in the effort, the countless hours by yourself on a bike riding in the middle of nowhere, and you usually get rewarded on race day with a great result if not a personal best.  Do the opposite, and arrive at the start line ill-prepared, and the next few hours can be a world of hurt.  Then there’s karma.  She can be cruel.  I met her first hand this summer during the Axel Merckx Gran Fondo.  When I signed up for the race months earlier, it seemed like a great idea.  How hard could focusing on one sport be?  But we knew with that whole plant a vineyard thing scheduled for spring and summer, it might be tough to find time to properly train for a 160km race.  Sure enough that was the case.  As race day approached, I had already downgraded my distance to 126km and then down to the 92km (due to an injury only weeks before) race to better match where I was at training-wise.  At least I knew I could finish that distance and do reasonably well.  That’s when karma smacked me upside the head.
(Joel all smiles before the race) 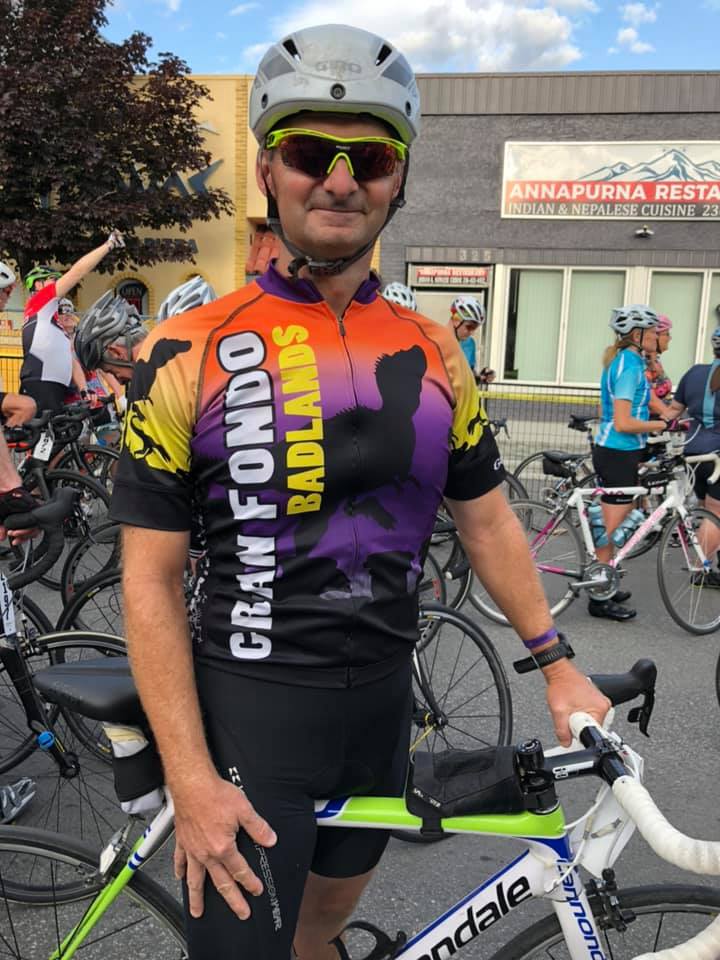 The race started pretty well.  I felt strong and felt ready for a good day riding out of Penticton.  Then something happened that had never happened in a race:  I flatted.  I had changed out the tube in my back tire the night before because of a slow leak and knew it was risky because I hadn’t tested the new tube – and was admittedly a little out of practice.  Sure enough, it only lasted 10km before popping.  I don’t change many tubes, especially while under pressure, but I wasn’t going to wait until a bike mechanic came.  After struggling for 10 minutes, I was back in the race … for a while.  Still plenty of time to have a pretty good day.  The new tube only lasted less than 3km before I flatted again.  This time a bike mechanic gave me a hand changing the tire but a good 10 minutes had elapsed again.  Okay, no personal best today, but at least I wasn’t last as there were still people trickling on by.  After having a professional give me a hand, I was convinced I was in good shape.  Guess again.
This race like most Fondos has a feature called the ‘King of the Mountain’ or KOM.  It’s a short but steep part of the race that is timed – it’s like a race in a race.  Pride is usually on the line.  Just as I started my KOM climb I felt a ka-thunk in my back wheel.  Yep, another flat and the ka-thunk was the wheel turning over the air nipple (hee hee – he just said nipple!).  I was out of spare tubes but knew there was a bike station at the top of the hill.  But a 2km hill is a long way on a flat and that’s a whole lotta ka-thunks.  So for the next 15ish minutes I struggled until I decided to give up and walk my bike up, which is pretty embarrassing when spectators are there thinking they’re offering support because the hill is too tough “you can do it – looking good”, “come on, get back on – peddle to the metal”.  ugh.  Just. not. my. day.  The Velofix guy was sympathetic and took his time looking at my wheel.  He concluded that I probably damaged the tape lining when changing my first flat in a panic.  The tube would then pinch and pop.  It took him a good 10-15 minutes to repair and change it.  I don’t actually know how long since it didn’t matter.   I just knew that I was dead last less than 20 km into the race.  How do I know this?  Well, here’s a sample list of the things I saw coming out of Summerland on the return to Penticton.  In other words, they were ahead of me one quarter of the way into the race:
They say karma’s a bitch.  I really believe it.  This was one race I wasn’t really ready for so I got what I deserved – a whole lotta bad luck.
If you know the Axel Merckx Fondo slogan, it’s “Ride Hard.  Smile Often”.  In this case, the drink had to be called “Ride Hard.  Flat Often”.  And of course, the drink had to involve LOTS of air to make up for the lack of it that day.  We started with intentions of making the drink blackberry liquer focused, but then realized our blackberry liqueur has seen better days.  So version 2 involved 1oz Creme de Violette, 1oz Empress 1908 gin, lavender bitters, topped with Sanpellegrino Limonata soda.  The foam on top is 1 egg white with 1oz St. Germain elderflower liqueur, shaken in a cocktail shaker.  Plus all the tools a cyclist needs on race day to change a flat… or several flats. 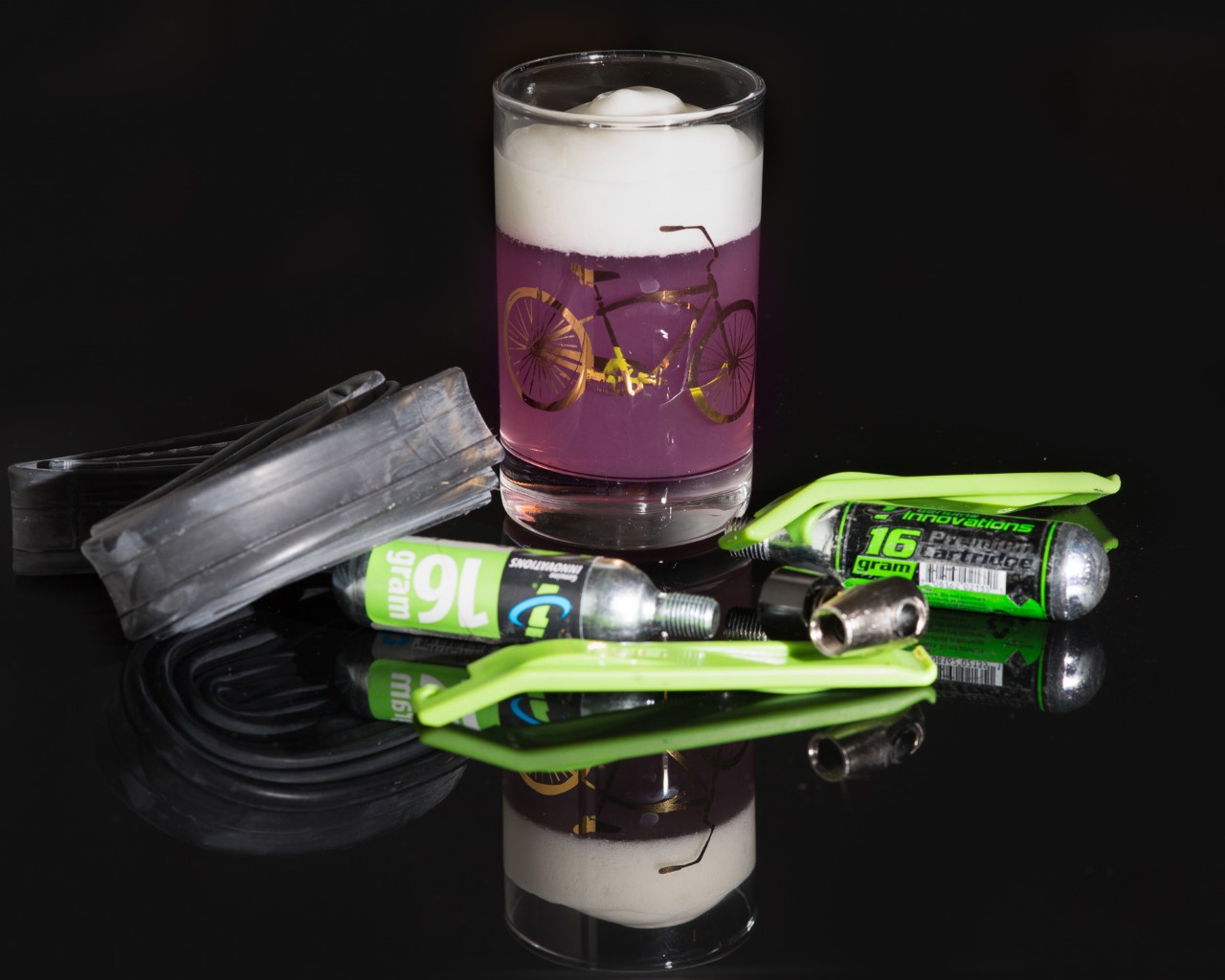 Huge thanks to Bike Barn and Velofix for their race day support!  Without them, angel wing girl would have finished ahead of me.