2019 was the year that climate change really became a hot topic – more so than any other year.  This was thanks in large part to the efforts of a 16 year old activist from Sweden, Greta Thunberg, whose blunt, direct speaking manner caught the world’s attention.  She organized Fridays off for all students (where were you when I needed you??) and basically had the jam to call a bunch of old white rich men a bunch of dickheads in front of a world stage.  Love her or hate her, she has been a polarizing figure bringing awareness to a topic she is very passionate defending.  Did a day go by when there wasn’t something on Facebook mocking her or supporting her?  Either way, she has undeniably had a major impact on this issue, perhaps on our lives.  And remember, she’s only a 16 year old kid.  Sixteen!
We knew for some time that we would have a drink in her honor.  Until today, the drink was called the ‘Greta’.  However, she will get her day in the sun, her 15 minutes of fame (or a lot more).  But how often do we acknowledge, honor, or celebrate (pick your word) cow farts.
Until this year, I was under the impression that CO2 emissions = global warming.  Greta’s crusade raised awareness to a new culprit – cow farts.  Apparently, methane is about 70 times worse for trapping in greenhouse gases.  This is not a good thing.  But there’s another reason to fear cow farts.  There is a direct correlation between cow fart concentration and Trump supporter concentration.  Consider this.  Trump is largely unpopular in urban centres.  So are wild cows and their farts.  Move even a few kilometers to rural areas and suddenly Trump’s popularity rises.  But so does the number of these beasts and their methane clouds.  Move to really rural areas and Trump’s popularity rises proportionately to the number of cows or other large animals blowing out major amounts of methane.  Coincidence or cause and effect?  Given the amount of BS that Trump has proven to have spouted, I think there must be a correlation between BS and bovine flatulence.
I understand that some people still deny climate change and its cause.  The science is argued both ways.  I’ve got my opinions but this isn’t about defending my argument either way.  This is about the real damage cow farts are causing.  Climate change may or may not ruin the world.  Trump, if he continues, could very well ruin the world.  And he’ll do it faster than you can say “why is the lobby of the Empire State Building in 3 feet of water?”
But in all seriousness, the best case scenario is that if Greta is right, she saves the world.  Worst case scenario is if she’s wrong, she’s still made the planet a little better and healthier and brought attention to the science behind a complex issue.  And she’s just a kid trying to do the right thing. Let’s cut her some slack (but no slack to the cows).
Thank you Greta. 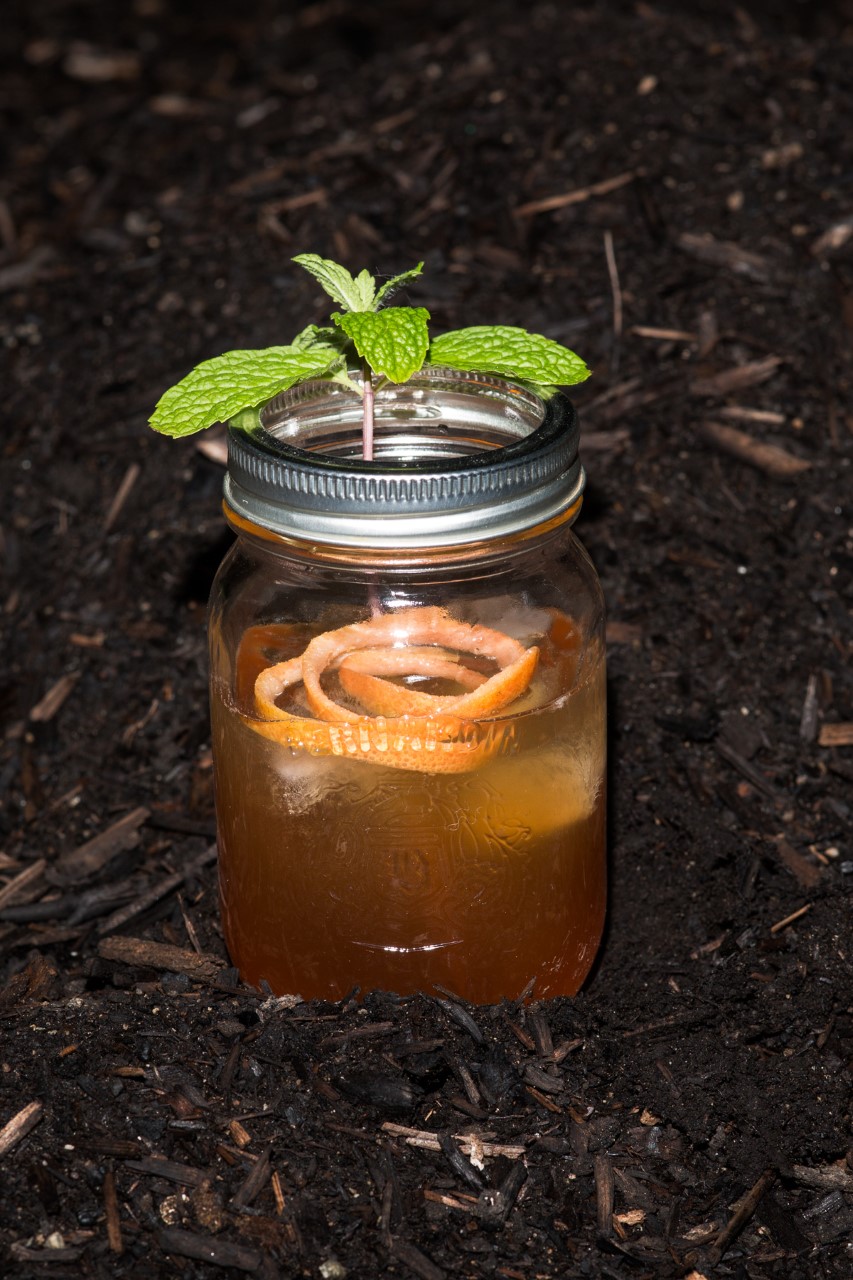 When researching drinks for this topic, the first thing that came to mind was a green drink, however, then we learned there is quite a movement for sustainable cocktails.  There’s a couple of schools of thought, one around reducing/reusing/upcycling ingredients that would normally be thrown out, and/or using in-house, organic, locally sourced ingredients.  We weren’t about to dig out old lemons out of the garbage, so we did our part by using local/in-house ingredients and then photographing “Cow Farts” on the sustainable compost pile (which is really just the solid form of cow farts).
“Cow Farts” is made with 5 oz of our homemade apricot mint kombucha (using our apricots and mint), 1oz Oliver based distillery Noteworthy gin (that stuff is strong!), 3oz Summerland based Alchemist apple liqueur, 1 tsp mint simple syrup (our mint), and then a squeeze of lime and a few drops of grapefruit bitters.  It’s actually pretty tasty!